Genoa 1-3 Roma: Edin Dzeko scores as Roma win for the first time in a month

Genoa 1-3 Roma: Edin Dzeko scores as Roma win for the first time in a month on the road against struggling Genoa

AS Roma returned to winning ways and moved into fourth place in Serie A with a 3-1 win at troubled Genoa on Sunday.

Cengiz Under put the visitors in front after five minutes, before they doubled their lead on the stroke of halftime when Davide Biraschi directed a cross into his own net.

Genoa struck back almost immediately through a Goran Pandev strike, but they were denied an equaliser in the second half when Roma goalkeeper Pau Lopez performed a superb save at full stretch to keep out an Edoardo Goldaniga header. 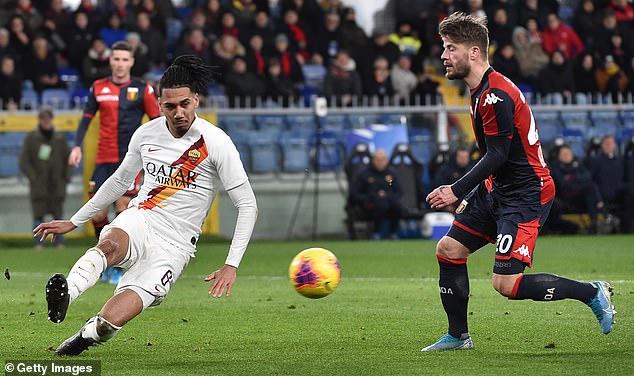 The capital club put the result beyond doubt with 16 minutes remaining when Edin Dzeko fired a shot into the bottom corner to earn his side their first league win since December 20, after back-to-back defeats against Torino and Juventus.

Roma are fourth on 38 points, three ahead of Atalanta before their home clash with rock-bottom SPAL on Monday.

Genoa have slipped to 19th place with 14 points, having won just one league game in their last 11 attempts.

Tweets by LiveSoccerTV
dailymail Champions League Jurgen Klopp Liverpool football sport
Powered by DMCA4FREE.COM | Your Flexible and Save Hosting Service
© Copyright 2020, All Rights Reserved
We use cookies to ensure that we give you the best experience on our website. If you continue to use this site we will assume that you are happy with it.Ok