Granit Xhaka has been selected in Unai Emery’s Arsenal team ahead of their crunch Europa League group stage clash with Eintracht Frankfurt.

The midfielder has been out in thew cold for 31 days after appearing to tell Gunners fans to ‘f*** off’ during the 2-2 draw with Crystal Palace on October 27.

Xhaka was stripped of the Arsenal captaincy in the days following the incident, but Emery has now deemed him ready to return to the fold against Frankfurt.

In Emery’s pre-match press conference he encouraged Arsenal fans to get behind the Switzerland international.

‘I hope every supporter supports him. Xhaka’s comeback is going to be important for us.’

‘As a coach each moment in my career is difficult. This is a very good but very hard job.

‘When you are winning you feel the support for everybody. 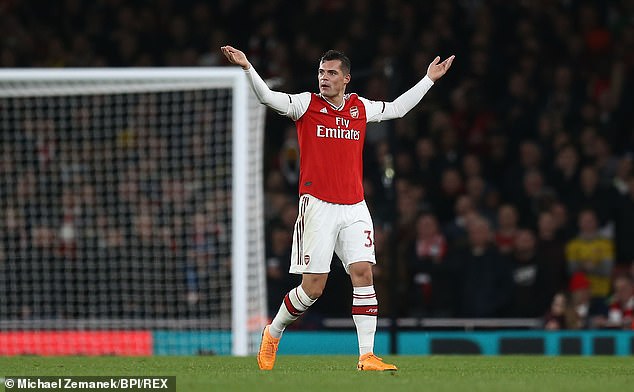 ‘Some teams are coming here fearless. My wish is tomorrow every supporter helps the team and helps the players.’

‘They are angry and disappointed, as well we are. We have a very good opportunity to do that.

‘Each match here in the Emirates is very important for that, the players need to feel backing them.’

Mesut Ozil has also been named on the bench and could make just his seventh Gunners appearance of the season.

Tweets by LiveSoccerTV
Transfer News dailymail West Ham United Manchester United sport football Chelsea Liverpool AC Milan Atletico Madrid Huddersfield Bournemouth Watford Queens Park Rangers Barcelona Middlesbrough Derby County Celtic Sheffield Utd Bundesliga Real Madrid West Bromwich Albion Serie A Newcastle United Cardiff City
Powered by DMCA4FREE.COM | Your Flexible and Save Hosting Service
© Copyright 2020, All Rights Reserved
We use cookies to ensure that we give you the best experience on our website. If you continue to use this site we will assume that you are happy with it.Ok