Manchester United youngster Tahith Chong was guilty of missing an open goal just moments before Ole Gunnar Solskjaer’s side had been pegged back by minnows Astana.

The Dutch starlet was teed up by Luke Shaw on 53 minutes with the visitors leading by a single goal, but squandered the guilt-edged chance after firing his effort over the crossbar from a matter of yards.

And to compile United’s misery, Astana raced down the other end of the field just moments later to score their equaliser. 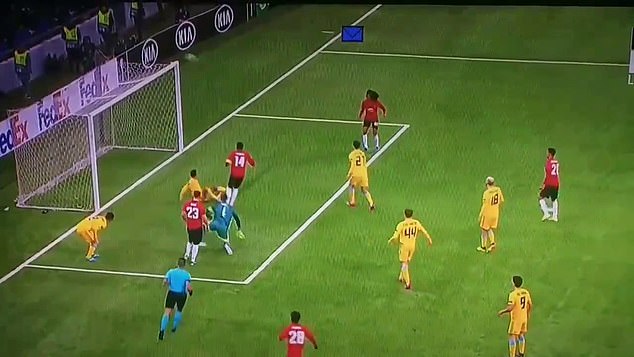 Superb work from Shaw had allowed the visitors’ full back to combine with Angel Gomes before jinking inside the penalty area and rolling the ball to his 19-year-old teammate, who somehow fired into the stand.

Ten minutes after the horror miss, Chong was hooked off by Solskjaer in place of D’Mani Bughail-Mellor to cap off a poor evening for the first-team hopeful.

Fellow youngster Di’Shon Bernard’s unfortunate own goal ensured that United fell to defeat, with several academy prospects handed the chance to impress with the club having already sealed progression from the group stage.

Social media users were left feeling thoroughly unimpressed with Chong’s exploits, with plenty of criticism directed at the winger.

One disgruntled United supporter labelled the miss as a ‘brilliant clearance by Chong for Astana’.

Another said: ‘This was literally one of the worst misses you’ll ever see.’

A third account held the same opinion after sharing the clip of the horribly skewed strike.

Dimitri Shomko’s leveller piled the pressure on the English giants’ young stars, and Astana condemned them to defeat after heroics from stopper Nenad Eric denied Gomes and Mason Greenwood late on. 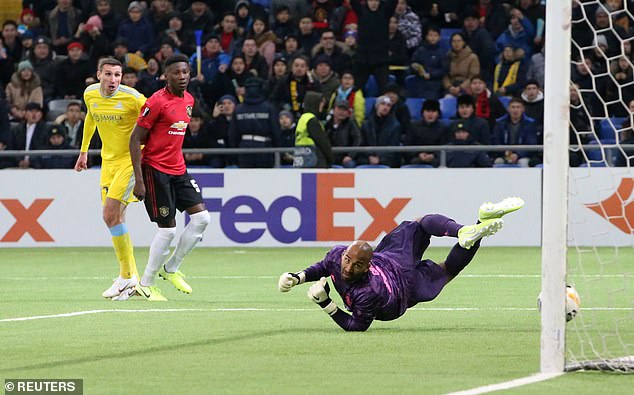 The Dutch prodigy’s contract is set to expire at the end of the campaign and Juventus are reportedly interested with Chong hopeful for more first-team opportunities.

But despite the player’s unhappiness, the Old Trafford side are believed to be confident of securing the former Feyenoord man to fresh terms.

Chong has recently been cagey when asked about his future at the club and refused to confirm whether or not he would remain at United.

Tweets by LiveSoccerTV
football dailymail sport Transfer News West Ham United Manchester United Serie A Juventus Atletico Madrid AC Milan Bournemouth Huddersfield Liverpool Chelsea Sheffield Utd Barcelona Middlesbrough Derby County Bundesliga Newcastle United Watford Queens Park Rangers Real Madrid Cardiff City West Bromwich Albion
Powered by DMCA4FREE.COM | Your Flexible and Save Hosting Service
© Copyright 2020, All Rights Reserved
We use cookies to ensure that we give you the best experience on our website. If you continue to use this site we will assume that you are happy with it.Ok