How do Ciro Immobile, Cristiano Ronaldo and Romelu Lukaku compare in Serie A this season?

The mantra between the top strikers in Serie A right now appears to be that anything you can do, I can do better.

Take the last round of matches as an example. As Ciro Immobile hit a first half brace for Lazio in their 5-1 demolition of SPAL, word soon made it to Turin and Cristiano Ronaldo duly obliged with a pair of penalties to boast a brace of his own in a 3-1 win.

Inter Milan, in a bid to keep up their finely balanced title bid, needed something similar from star striker Romelu Lukaku on Sunday away to Udinese and right on cue, the former Manchester United striker delivered both goals in a 2-0 win. Much like the title race, the battle to be the division’s top scorer remains closer than ever. 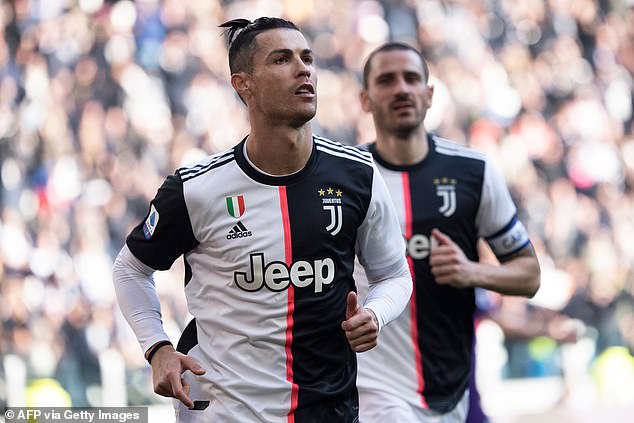 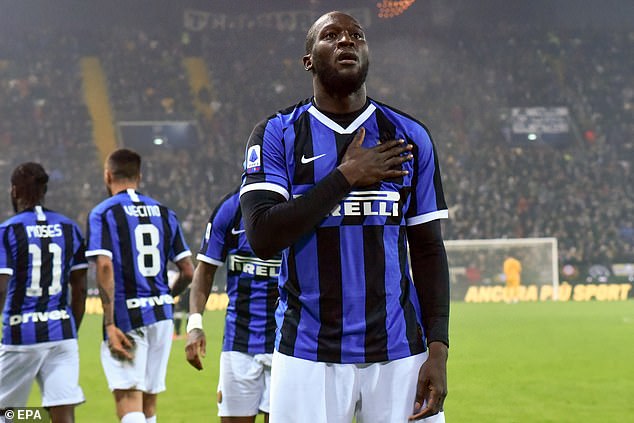 For a nation often prided on their defensive nous over the years, Serie A is now a place to go if goals are top of the wishlist.

Immobile, with 25 goals in Serie A, is the leading scorer across Europe’s top five leagues, narrowly ahead of Bayern Munich’s Robert Lewandowski, who has 22 in the Bundesliga.

So, with 16 games to go this season, and the race for the Capocannoniere top scorer trophy heating up, Sportsmail looks at how the three players compare…

Where would Lazio be without the goals of Immobile? Not in title contention, that much is certain.

The Biancocelesti are remarkably within touching distance of both Juventus and Inter Milan in February and much is down to the ruthlessness of Immobile in front of goal.

Against SPAL on Saturday, his first was a typical striker’s finish. A flick on from a corner made its way to the back post and there was an unmarked Immobile to fire high into the roof of the net. 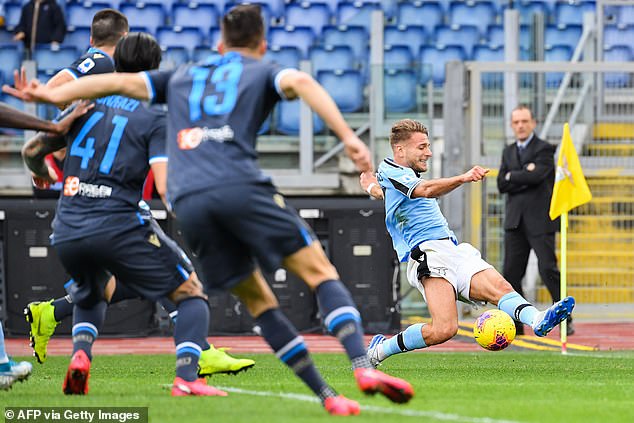 That has not been uncommon for the 29-year-old, either.

That right-footed finish was the 18th of the season for him, his 19th would follow soon after with an audacious chip over goalkeeper Etrit Berisha.

Despite being 6ft1, heading is not a key component of Immobile’s production.

His right foot may need to be insured by Simone Inzaghi and his staff, such has been their reliance on it to this point.

Nineteen goals from his right foot and four from his left, along with two headers, will no doubt be included in every scouting report between now and the end of the season.

While he could be accused of being predictable, his goals have not dried up and to be Europe’s leading scorer across the top five leagues in a side few would have considered title challengers at the start of the season is remarkable.

He has created more chances than both Ronaldo and Lukaku and has more assists than both of them combined.

Lazio are a side who create ample opportunities having been built on an attack designed to strangle opponents.

But, even so, Immobile has not spurned many chances, converting 30.1 per cent of his efforts which is superior to both of his golden boot rivals so far.

The key now will be whether he can deliver in the two huge games remaining: a visit from Inter Milan and a trip to Turin to take on Juventus.

He did not score in either of the previous matches against the title rivals and while his stats prove he is outperforming Ronaldo and Lukaku, he will need to deliver in clutch situations if he wants more than just a scoring title to reflect on at the end of the season.

There was a time earlier in the campaign where hushed tones in Italy were beginning to suggest that Father Time had finally caught up with Ronaldo.

After all, he has been super-human at times. Five Champions League titles, hundreds of goals scored, hauling Portugal to a European Championship and is now carrying Juventus’ European ambitions on his shoulders. 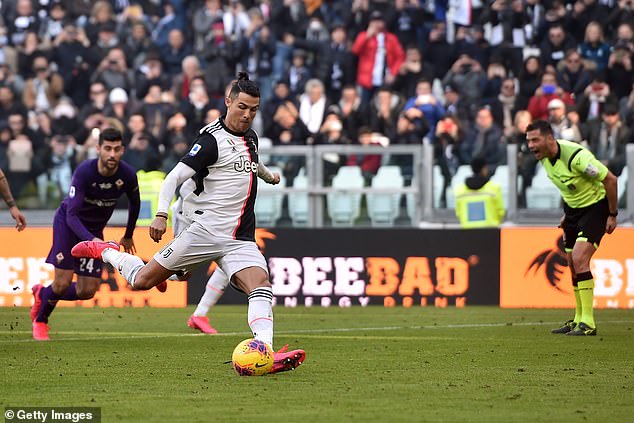 In his first 10 league appearances of the season, Ronaldo had five goals.

For the Portuguese, that was alarming, even with concerns over an injury that had not been given time to heal.

But whatever Ronaldo told himself at the start of December worked wonders as he has scored in all nine games since a 2-2 home draw with Sassuolo.

Braces against Udinese, Parma and Fiorentina, along with a hat-trick against Cagliari, have taken Ronaldo’s tally to 19 goals in 19 league goals and firmly back in the race to beat Immobile to the scoring title.

It has been five years since Ronaldo claimed a golden boot and while he has bigger ambitions for Juventus, part of him will be desperate to snap his barren run come the end of the 2019-20 campaign.

Having played the fewest minutes of the three strikers in question, Ronaldo’s brilliant 2020 has him back in the conversation, even if he is the most wasteful.

Ronaldo has converted just 18.1 per cent of his chances for Juventus and is perhaps fortunate the Italian champions are afforded so much possession to create ample opportunities for him to score.

Much like Immobile, penalties are vital to his final total moving forward and his pair against Fiorentina at the weekend took his season count to seven in the league.

A surprise is that is Ronaldo has just two headed goals, an area of his game that he has often excelled in, as proven by his wondrous leap to net against Sampdoria earlier this season.

Juventus’ attacking arsenal includes Paulo Dybala and Gonzalo Higuain but Ronaldo is the man much of their success hinges on.

For a man as accomplished as the Portuguese, he will not want to be shown up for a second successive season in the Serie A scoring stakes.

‘I heard people say Romelu Lukaku was a donkey,’ Inter boss Antonio Conte said recently. ‘I heard all sorts not even that long ago.’

He was irritated and that was no doubt fed to the Belgian striker because he looks a world away from the player that struggled to make an impact in his final months at Manchester United.

Lukaku is a vital cog in Inter’s title bid and 16 league goals to date, as well as his key contributions to team-mate Lautaro Martinez, has shown his immense value to the side. 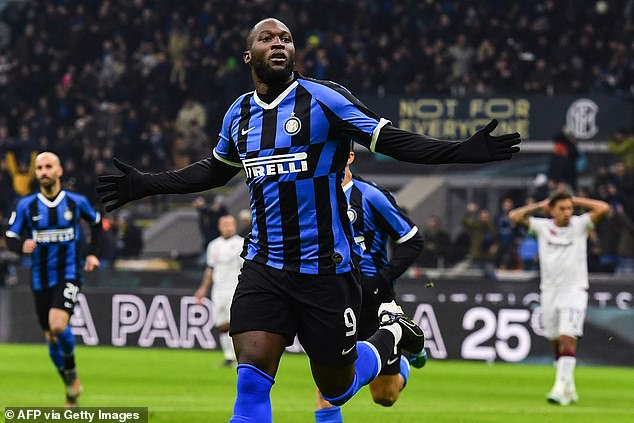 The 26-year-old is perfect for Conte’s desired 3-5-2 system and yet he has created the fewest opportunities and played the most minutes compared to Ronaldo and Immobile.

He is not as dominant on penalties and has a lower expected goals total.

With Inter’s title bid so delicately poised right now, they can ill-afford for Lukaku’s numbers to decrease any further; if he drops off, their position will soon follow.

Conte described getting Lukaku as the chance to ‘polish the diamond’ and so far their first spell together is bringing plenty of positive results.

Much like it is for Immobile, the key now is delivering in big moments, defining games with tricky trips to Lazio and Juventus in the next month.

A golden shoe in Italy would vindicate his £73million arrival but should he fall short while firing Inter to their first title in a decade, his value would be a whole lot more.