‘If a good offer were to come in, we sit down and talk’: Richarlison hints at potential Everton departure but Brazilian does admit he ‘can hold on for another season’

Brazilian forward Richarlison has hinted that he could leave Everton if the right offer was to come in for him.

The 23-year-old was the subject of an £85million bid from Barcelona in January but Everton held firm and kept hold of their star man, who signed for the club in 2018.

Richarlison, who scored 15 goals and provided four assists in all competitions last season, remains one of Everton’s key assets and Carlo Ancelotti is desperate for him to stay at Goodison Park.

And the Brazilian has revealed Ancelotti has held talks with him urging him to remain on Merseyside for another season, before admitting that he would consider a potential move if an enticing offer came in for his services.

Asked about talks with Ancelotti, Richarlison told Globo Esporte: ‘It’s all been talked about, he’s already told me he’s counting on me for another season, he asked me to hold on for a bit.

‘Though it all depends, if a good offer were to come in, we sit down and talk, that’s part of football. We’re still talking about these details, working things out.

‘He’s bringing in new players, so we’ll sit down and talk, but I think I can hold on for another season.’ 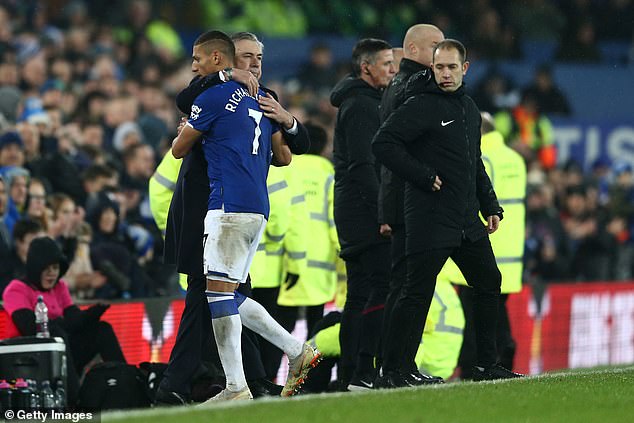 Richarlison and his Everton team-mates endured a difficult 2019-20 season, finishing 12th in the Premier League but the forward believes things can only get better under Ancelotti – who took over in December last year.

‘I can only develop further now with the arrival of Ancelotti, he’s someone who’s always talking to me every day,’ Richarlison added.

‘Of course during the season we had a bad spell, we couldn’t meet our objective, but I was always there giving everything, scoring goals and helping my team-mates.

‘I believe that Ancelotti will make changes to the team and we’ll improve next season and I’ll be able to score even more goals.’

Jose Mourinho’s safety-first football is sucking the life out of Spurs…...

How Leicester find themselves in serious danger of missing out on...

Burnley star Jay Rodriguez reveals all on the sepsis scare that...