Mikel Arteta’s Arsenal are a work in progress but at Molineux against very tricky opponents there were exciting glimpses of the masterpiece he hopes to create.

This was Arsenal’s fourth win in a row after the late horrors of Brighton and by far the most impressive.

To put it into context, Wolves were previously unbeaten in eight league games and hadn’t conceded or dropped any points since lockdown. 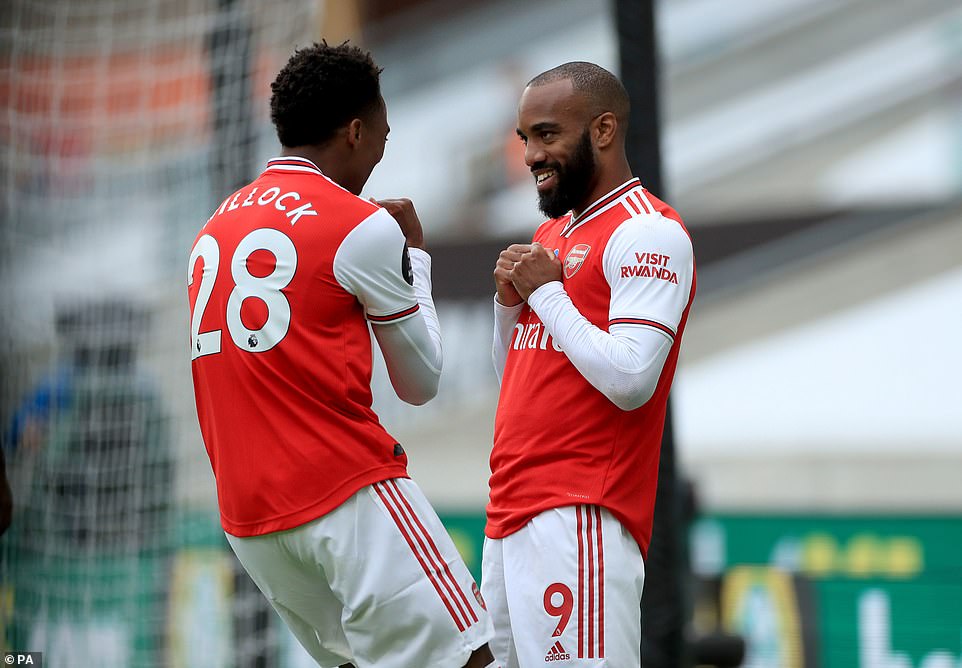 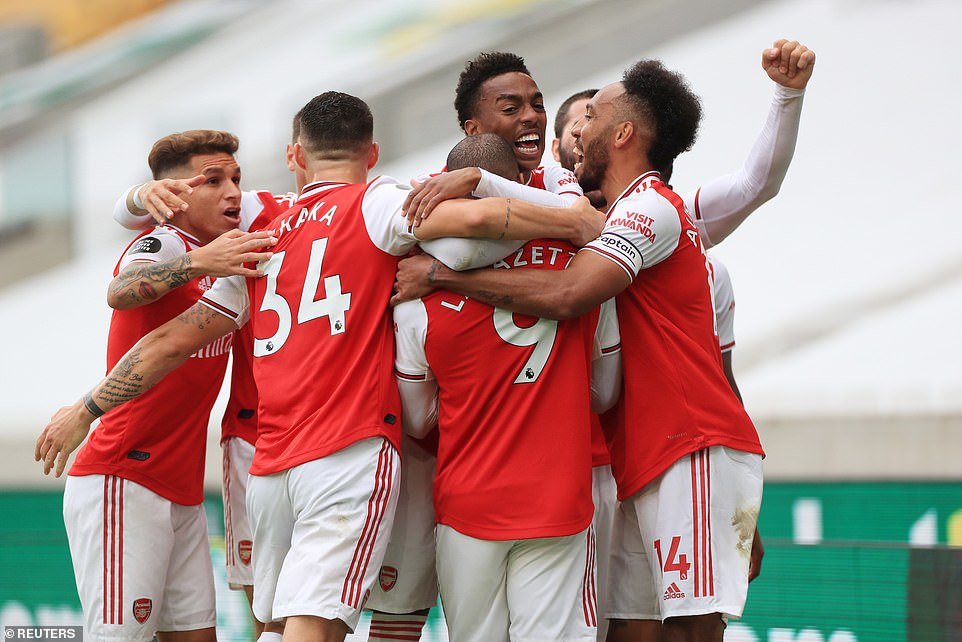 It was arguably Arsenal’s best performance of what has been a turbulent campaign, showing real determination and grit

Yet Arsenal thoroughly deserved victory earned through goals in each half by Bukayo Saka and Alexander Lacazette with Arteta equally impressed by a clean sheet. ‘The reason we can beat anyone is because we enjoy suffering together,’ he said.

Both goals underlined what the Arsenal boss is trying to do.

Saka, still only 18 and looking even younger, signed a new long-term contract at The Emirates last week and Arteta expects great things from the bubbly winger.

The way he adjusted his body shape and wrapped his left foot over the ball to connect with Kieran Tierney’s deflected cross shortly before half-time was worthy of his first Premier League goal. Ironically, the teenager might not even have started without Pepe’s wife going into labour forcing the Frenchman to miss out.

Alexandre Lacazette’s second late on was also encouraging. The £50million striker has had to be patient on the bench but Arteta has liked his attitude and stuck by him – unlike Matteo Guendouzi and Mesut Ozil who weren’t in the 18.

Lacazette’s opportunity arrived after 82 minutes and he scored after 86, cleverly spinning past Wolves skipper Conor Coady before clinically placing the ball in the bottom corner.

‘A great touch, a great finish. He deserved that for his attitude every day in training,’ said his manager. ‘When I turned to him, he was jumped up and ready in three seconds.’

More good news for Arteta was a mature performance from David Luiz at the heart of Arsenal’s three-man central defence where he did so well in Antonio Conte’s title-winning Chelsea team.

Luiz didn’t take any risks and when the dangerous Adama Traore went past him, he fouled the flying Wolves player and got a booking. Just like a centre-half should.

The wing-backs also showed energy up and down, first Cedric Soares and Kieran Tierney, then their replacements Hector Bellerin and Ainsley Maitland-Niles, the latter keeping danger-man Adama Traore quieter than any of his other team-mates could.

Victory sent Arsenal up to seventh with Sheffield United playing today (Sunday) and while the late rally has come to late to challenge for a Champions League berth, they will be disappointed to miss out on Europe now.

‘This is probably one of the best wins I’ve had as Arsenal manager because of how well Wolves have done this season,’ said Arteta. ‘It is another step forward in our process. 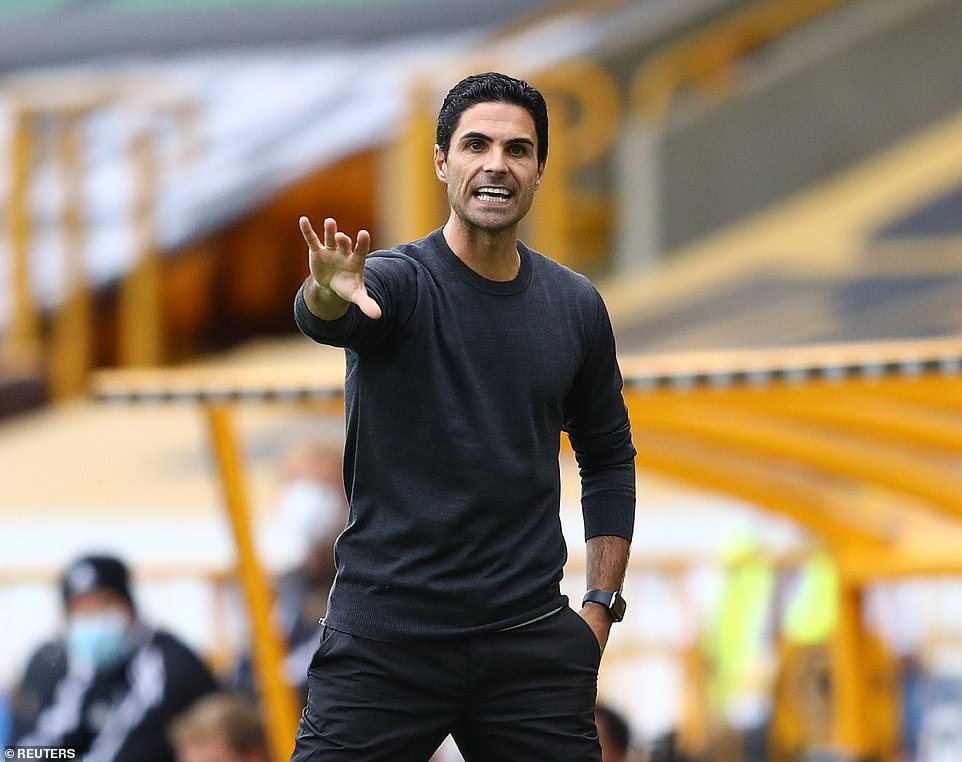 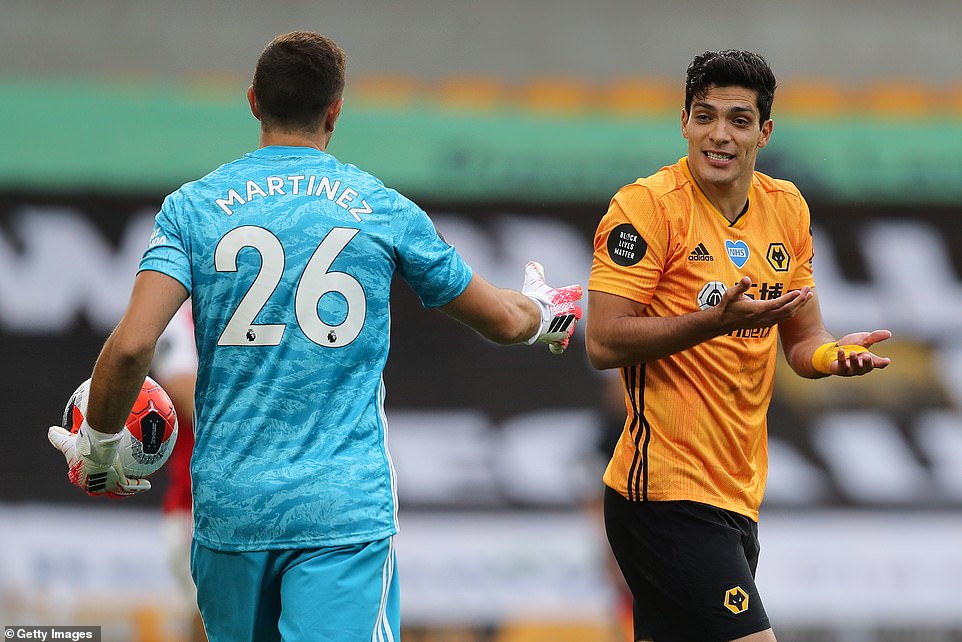 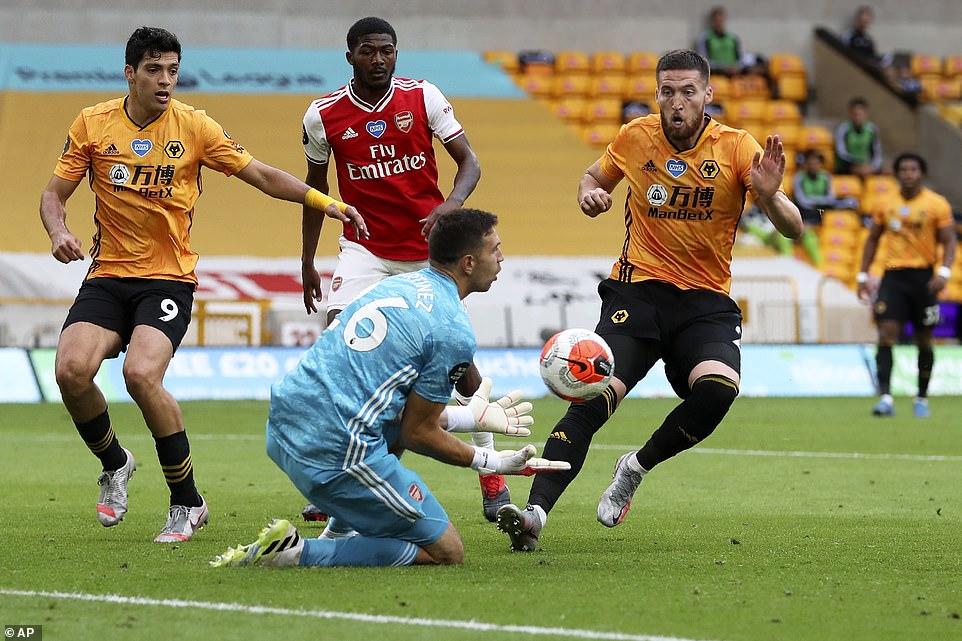 ‘I said after losing at Brighton I was always happy with the effort of my players but we couldn’t give anything to our opponents. A few weeks a

ago the Champions League looked impossible. It is Leicester next. If we play with intensity, we will make it hard for any team.

‘Bukayo scored a really good goal but what I liked even more is that when things weren’t going for him, he kept trying and didn’t put his head down.’

For Wolves, it was an unexpectedly flat display given recent form and the fact they’d had a full week’s break while Arsenal were playing their sixth match in 17 days.

Their one outlet was Traore and if he wasn’t on the ball, nobody else stepped up.

‘Not one of our best performances,’ admitted manager Nuno Espirito Santo whose side are still above Arsenal but have lost ground to Leicester and Manchester United in the race for a Champions League berth. 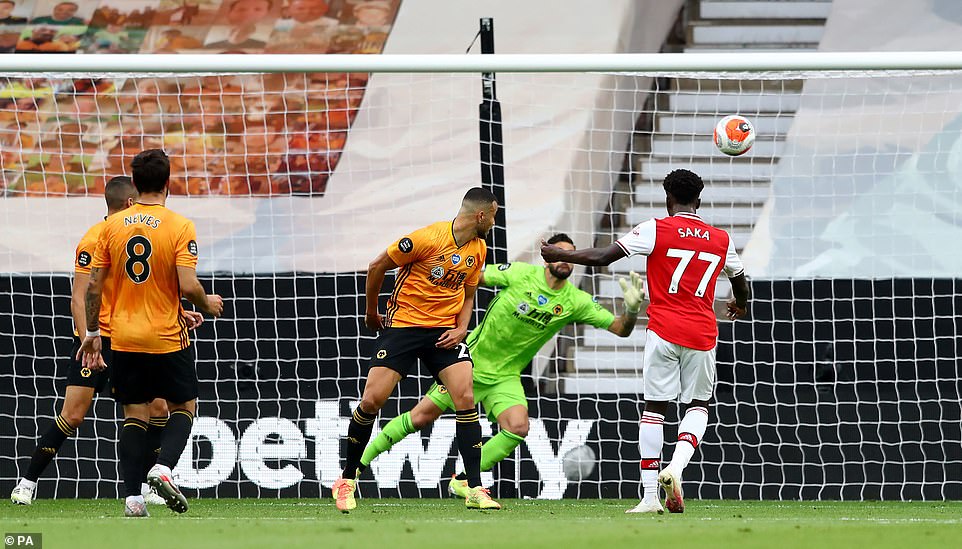 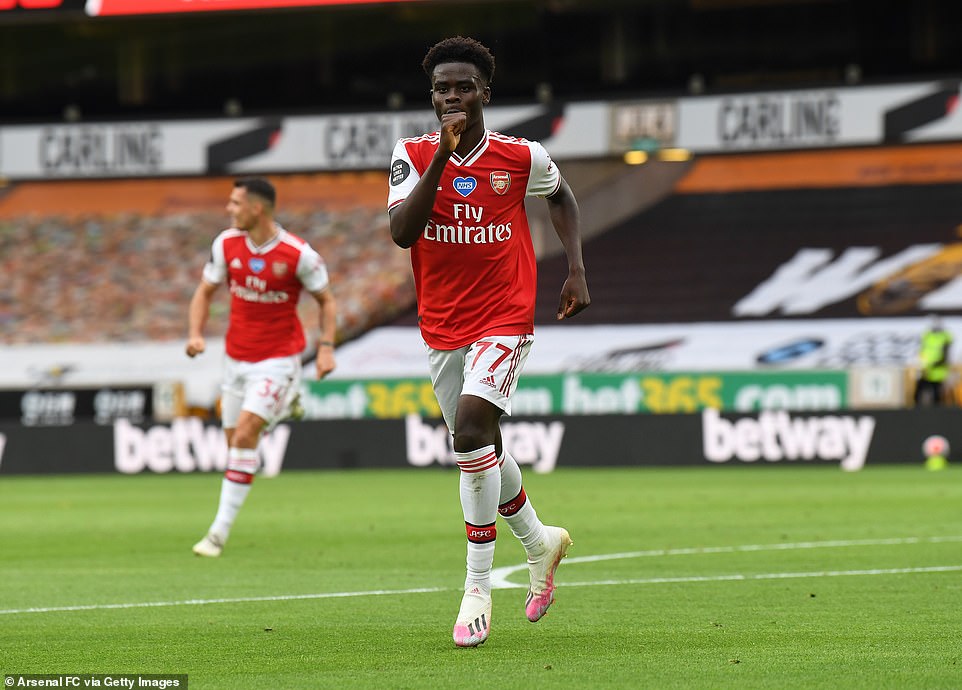 Saka, who has been the jewel in Arsenal’s crown this season, celebrates after opening the scoring for the Gunners 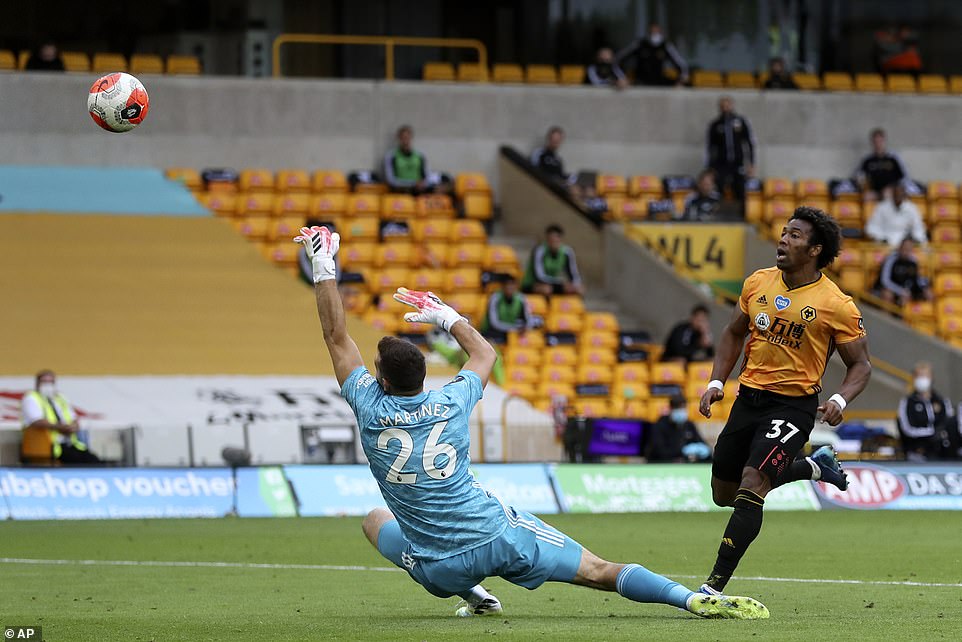 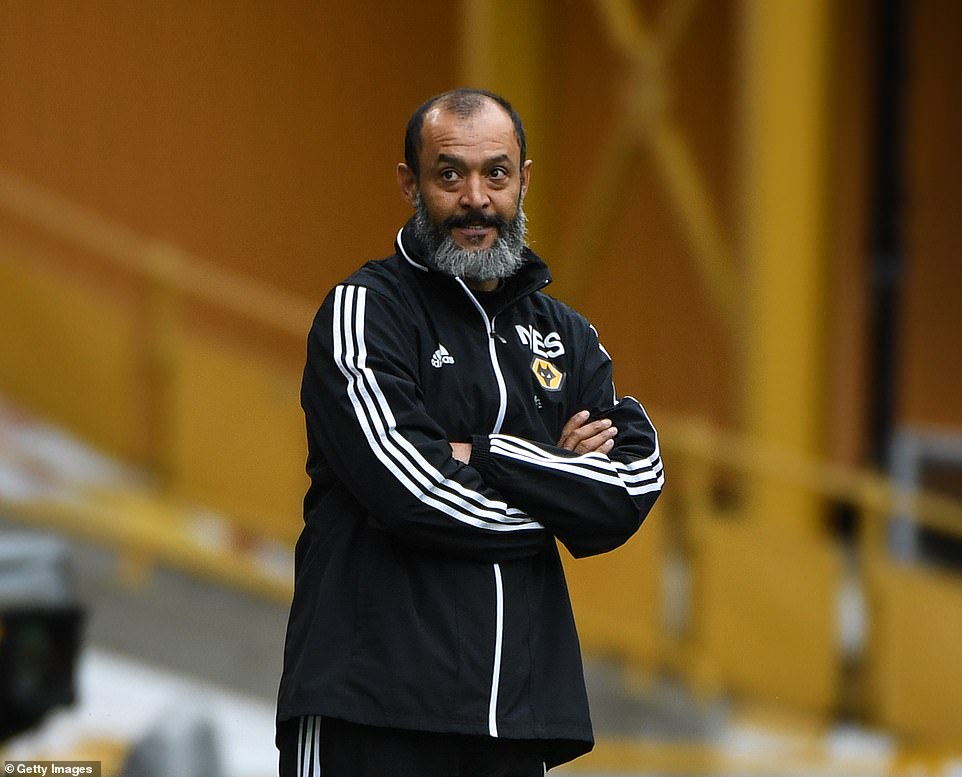 ‘Arsenal are a good team with talented players and today we didn’t perform so well. We can’t control what people say about Europe, we never look at the table.’

Traore started like a rocket, shooting past Dani Ceballos, Saed Kolasinac and Luiz in separate attacks.

But it was Arsenal who always looked the more rounded team and carried the bigger goal threat.

Skipper Pierre-Emerick Aubameyang tested Rui Patricio from a corner after 25 minutes and youngster Eddie Nketiah went even closer when his instinctive half-volley forced the Portuguese ‘keeper to palm onto a post.

Arsenal didn’t have long to wait for their breakthrough however. After 43 minutes, Cedric Soares dashed down the right and Aubameyang cleverly switched play to the other flank where the other wing-back Kieran Tierney was raiding. 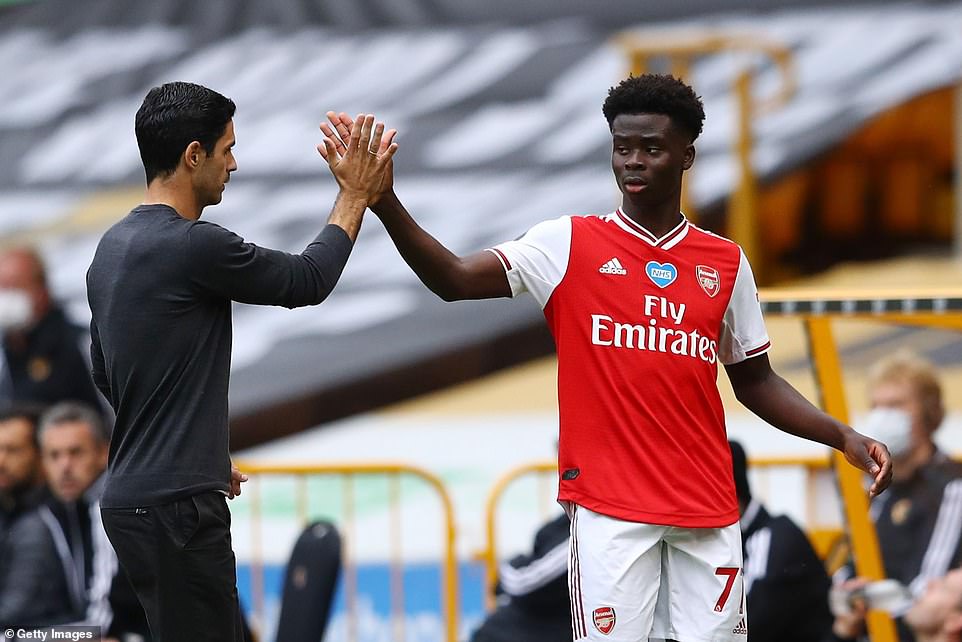 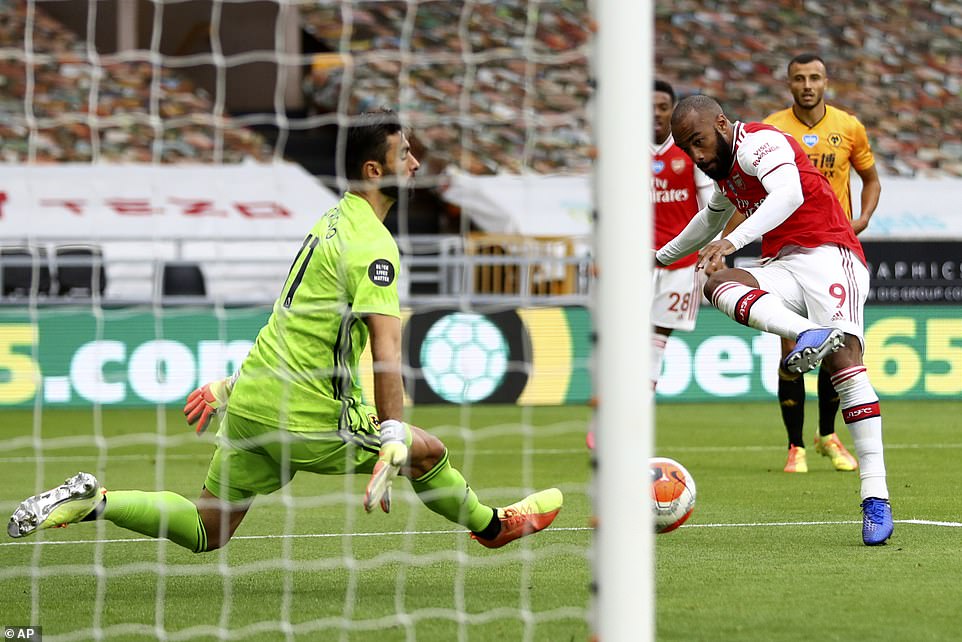 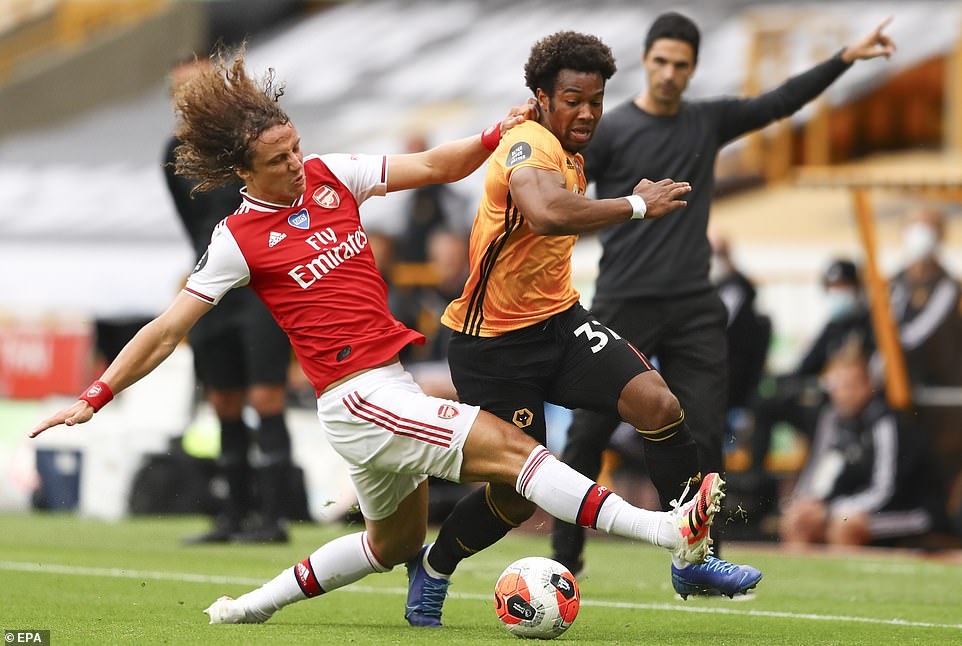 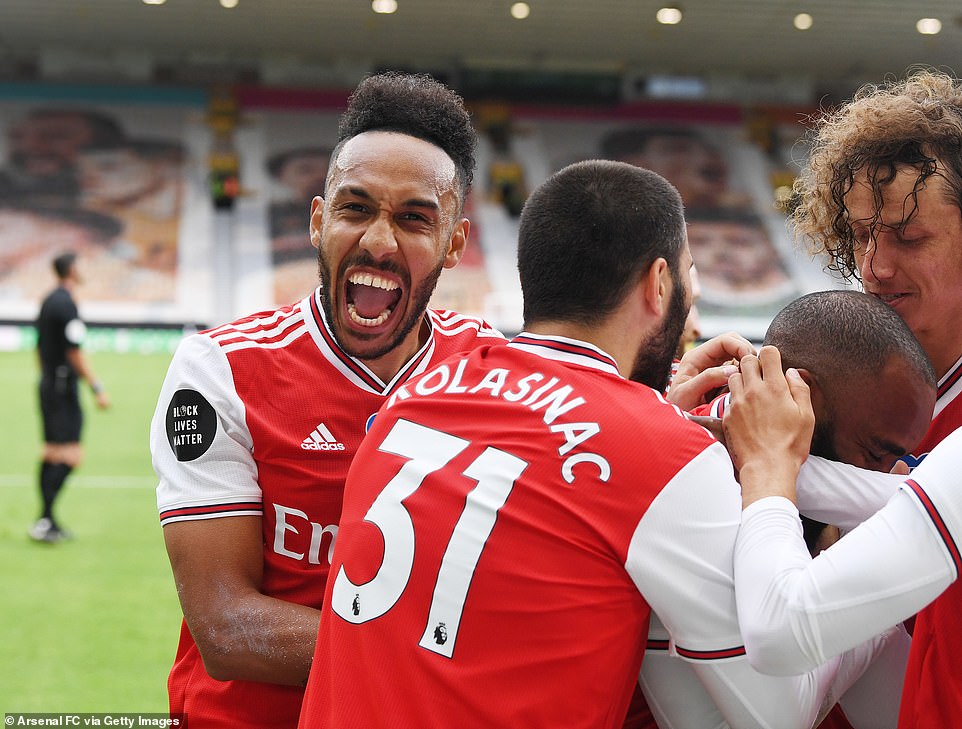 Tierney’s cross struck Matt Doherty and while the Arsenal players appealed for handball, Saka cleverly adjusted his body shape before thumping in a half-volley from eight yards.

Wolves sent on Diogo Jota after 55 minutes and switched Traore from the middle to the wing. Arteta responded by sending on the pacey Ainsley Maitland-Niles to left-back to counter him.

Traore did have one chance, dinking over the bar when put through by Raul Jimenez, but surprisingly the Wolves threat receded towards the end.

Instead, Arsenal grew in confidence and two replacements settled the game, Joe Willock sliding a pass into Lacazette, who turned Conor Coady and fired home. It was the Frenchman’s first away goal since Huddersfield last season.

Nuno confirmed afterwards that he’d been unable to pick forward Daniel Podence. The youngster has tested negative for Covid-19 but made an important private trip to Portugal and has to quarantine as a result. ‘We have to abide by Government regulations,’ said the Wolves boss.

Relive the action with Sportsmail below

Antoine Griezmann is showing he can do what Neymar once did...

MARTIN SAMUEL: Manchester United and Chelsea both need to drop their...

Liverpool and Manchester City ‘to battle for signing of Sevilla defender...

Wayne Rooney was Sir Alex Ferguson’s golden boy… but there were...