When Bayern Munich began their very public pursuit of Callum Hudson-Odoi in January of last year, it left plenty of fans with one major question. Who is he?

The Chelsea winger, who joined the club at the age of seven and rose through the academy, had featured as a substitute in just one Premier League game prior to the Bundesliga giants launching what would prove to the first of several big-money bids.

He had also played in the Europa League four times and started the Community Shield against Manchester City, but was far from a regular in Maurizio Sarri’s side. 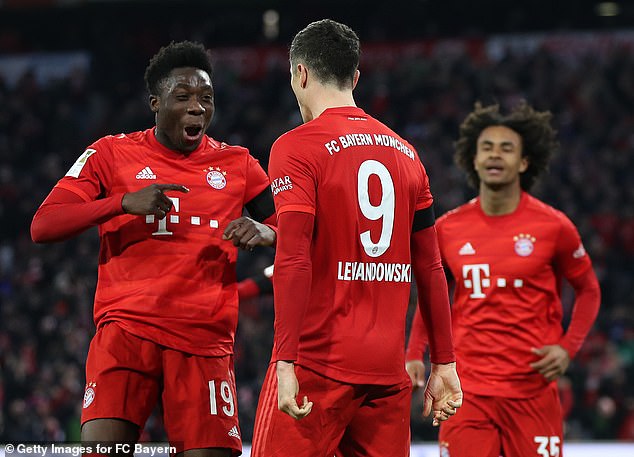 Yet if Bayern had got their way, Hudson-Odoi would be lining up against Chelsea, in this Saturday’s Champions League last-16 tie – a contest all but over as the Germans lead 3-0 from the first leg back in February. Hudson-Odoi missed that game through injury.

Bayern eventually made a final bid of £40million for the winger during the winter transfer window after sporting director Hasan Salihamidzic ‘nearly fell in love’ with him, according to club chief Karl-Heinz Rummenigge.

The Germans had been following his progress for some time and saw the then 18-year-old as a natural replacement for Arjen Robben, who would go on to retire at the end of the season.

There was an understanding in place that not only would Hudson-Odoi be offered a far more lucrative contract than the one he was on at Chelsea, but that playing time would not be an issue.

That was the major factor which led to him handing in a transfer request with less than a week of the window to go, with Salihamidzic continuing Bayern’s quest to land him by telling reporters they ‘really want to sign him’.

Chelsea, however, were not playing ball. Every offer was immediately rejected, including a £20m bid with a buy-back clause from the ambitious RB Leipzig.

In a attempt to get one of the gems of their youth set-up to stay, the Blues even offered Hudson-Odoi a new, improved contract worth £80,000 a week.

He did not sign it, but not because the terms were not agreeable. Minutes were what mattered most to the London-born wideman, who was desperate to follow in the footsteps of his close friend Jadon Sancho. 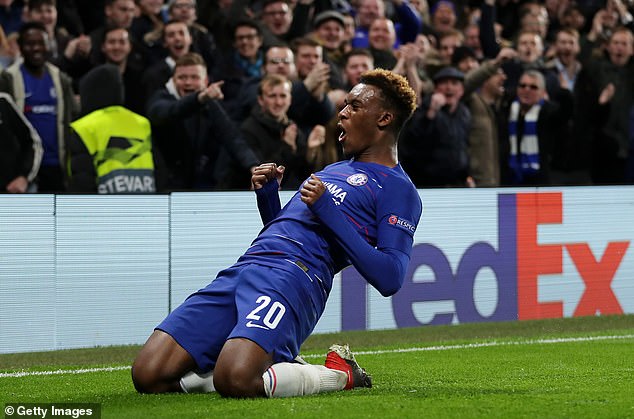 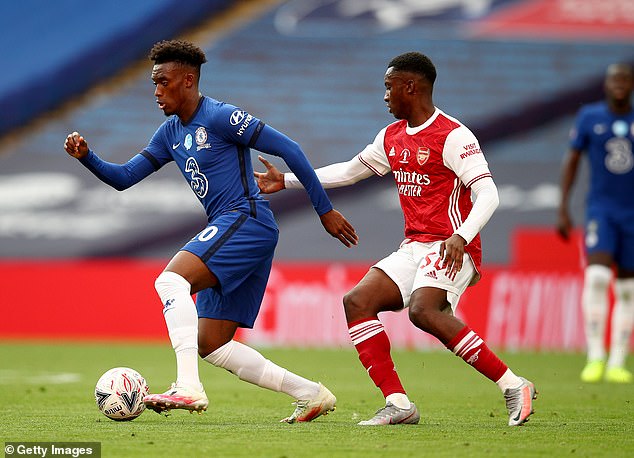 Hudson-Odoi had watched his former England Under-17 team-mate quickly develop into the hottest property in the Bundesliga at Borussia Dortmund, and wanted to do the same at Bayern rather than sitting on Sarri’s bench.

But despite his fierce determination to test himself in Germany, the two clubs never got close to agreeing a deal and he stayed at Stamford Bridge.

After scoring his second goal of the season – against Sheffield Wednesday in the FA Cup – right in the middle of the month’s biggest transfer saga, Hudson-Odoi was able to focus on his football again after the window closed.

He soon began getting more opportunities under Sarri and paid him back with three Europa League goals in two knockout wins over Malmo and Dynamo Kiev.

A substitute appearance in the Carabao Cup final against Manchester City and more minutes off the bench in the Premier League also followed, as did a surprise call-up to Gareth Southgate’s England squad in March. 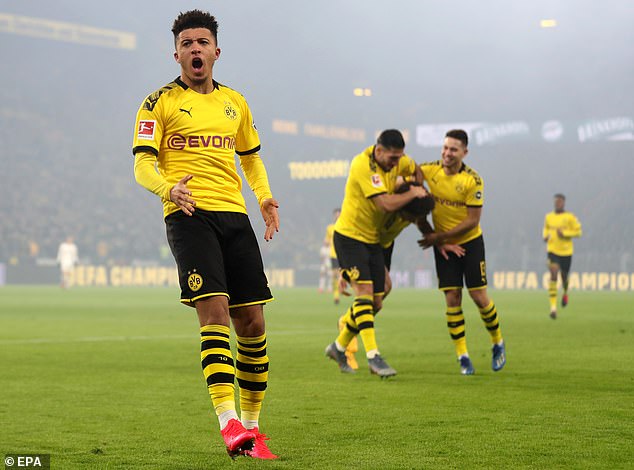 Hudson-Odoi’s impressive display as a sub in a thumping 5-0 win over the Czech Republic at Wembley earned him his full debut away in Montenegro and he delivered again, providing an assist for his Chelsea team-mate Ross Barkley.

His first Premier League start finally came the following week against Brighton, and he kept his place for games against West Ham, Liverpool and Burnley.

It was against the Clarets, though, that his rapid rise suddenly came to a halt when he suffered a ruptured Achilles tendon.

The injury would keep Hudson-Odoi out of action for five months.

Despite more interest from the Bundesliga champions last summer, Hudson-Odoi put pen-to-paper on a huge new contract with Chelsea before making his return to action in late September.

The deal, which is worth around £50million over five years, sees the England international earn £180,000 per week, rising to £200,000, and makes him one of the best-paid footballers under 20 on the planet. 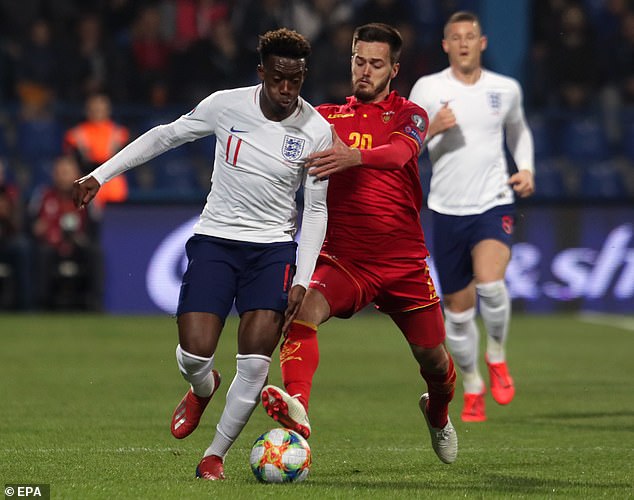 To say he is yet to justify such a significant investment would be an understatement.

Since starting and scoring against Grimsby in the Carabao Cup, Hudson-Odoi has been included in Frank Lampard’s starting XI just seven times in the Premier League – and none since football restarted after coronavirus forced a three-month break on the game.

And while things on the pitch haven’t gone to plan in recent times, off the pitch his career had also been derailed after allegations of rape had been made against him during the coronavirus lockdown, which he was later cleared of.

He was arrested in May and later released on bail after flouting social distancing guidelines to invite a model he had reportedly met online to his home in Battersea.

The police then attended reports of an incident after being called by the woman, who was taken to hospital by an ambulance that night after reporting that she had been raped.

But following a thorough investigation, it had been confirmed that the Met Police would take no further action against Hudson-Odoi after the allegations were made against him. 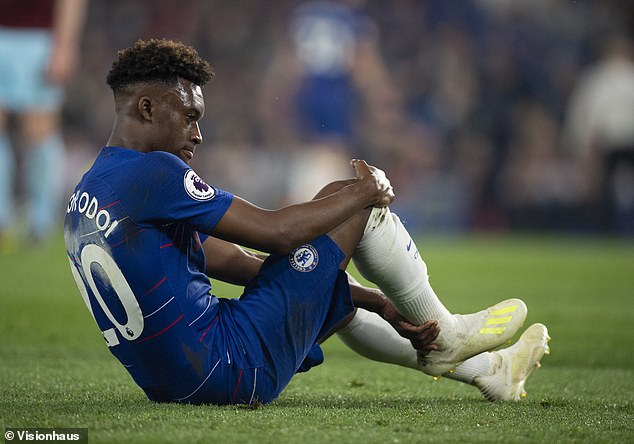 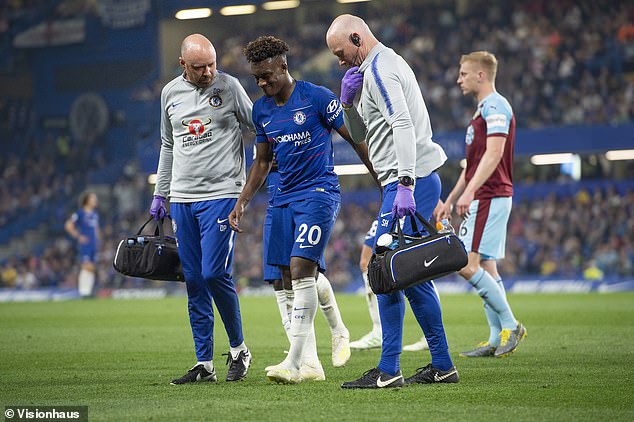 It was back to making sure his football was doing the talking since he must know that improvements need to be made if he wants a future at Stamford Bridge.

The 19-year-old’s statistics in all competitions this season read: 33 appearances, three goals and six assists. For a player with aspirations of playing for his country at Euro 2020, it has not been good enough.

Lampard, who played a huge role in convincing Hudson-Odoi to sign a new deal, admitted as much when talking about the winger pre-lockdown.

‘He’s signed a long contract here, but now he has to produce. I think it’s a lot to say “you must produce instantly, or you’ll have social media giving it to you” – I will try and protect him from that.

But his performances have not always gone down well among some sections of Chelsea’s support and in his substitute appearances this summer there’s been little more than flashes of what he is capable of. Fans expect more of a player earmarked by the club as the man to replace Eden Hazard in the long term. 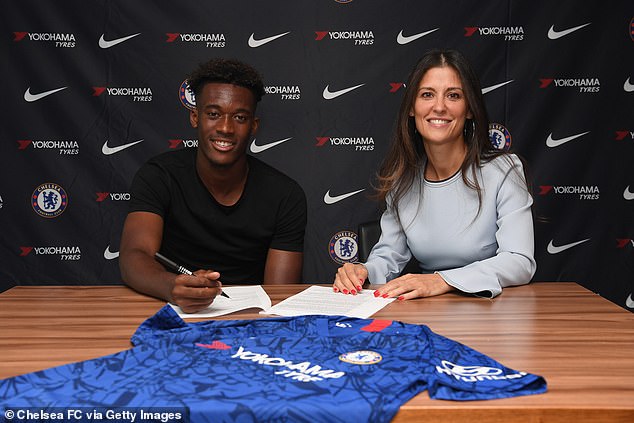 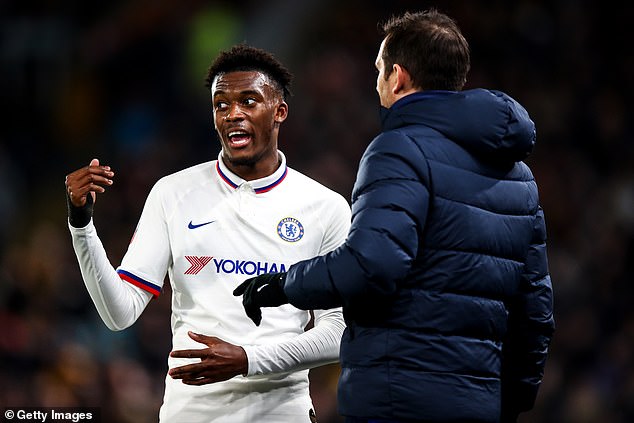 And while it’s far too soon to expect Hudson-Odoi to dictate games like the Belgian did, especially after such a serious injury, he is yet to kick-on after bursting onto the scene as a bright spark in an largely dull season under Sarri.

‘There were times last year where I felt a bit of frustration or times when I wanted to play more because I love the game. I was thinking, “what happens if I do that (go to Bayern)?” But at the same time, I thought to myself, “this is the club that I’ve been at and this is where I want to become a key player”.

‘I made the right decision to stay at Chelsea. I’ve been there all my life and I’ve loved the club from day one. Obviously, the academy boys who have come through are playing loads of games and I’m happy to be around them. Now I just want to keep working hard for the team and achieve something with the club.’

Achieving a place in the quarter-final of the Champions League looks a step too far but there would be no better game for Hudson-Odoi to rediscover the form that made the German giants sit up and take notice in the first place.

‘This one is for the fans’: Manchester United unveil black away...