Oleksandr Zinchenko scored a stunning winner as Ukraine edged past Switzerland 2-1 in the opening round of the UEFA Nations League on Thursday night.

The Manchester City full-back curled in a stunning effort from an almost-impossible angle to send his country top of Group A4.

West Ham forward Andriy Yarmolenko had given Ukraine the lead in the first-half, but Andriy Shevchenko’s side were pegged by before the break through Haris Seferovic’s long-range strike. 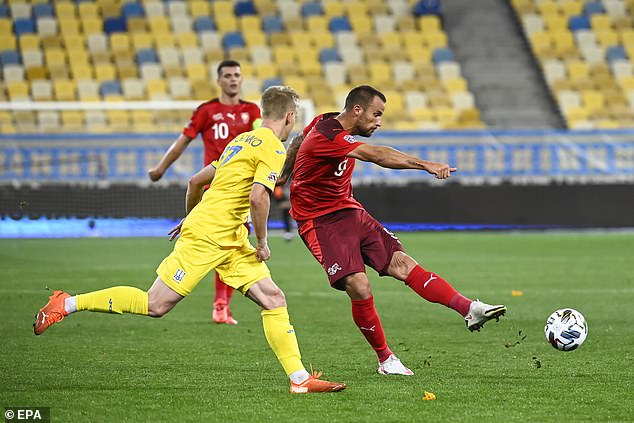 But Zincenko struck with just over 20 minutes to play, with Ukraine now holding a two-point advantage over Spain and Germany who drew tonight.

There was another stunning goal in the Nations League on Thursday night as Dominik Szoboszlai hit a sensational late free-kick to give Hungary a 1-0 win over Turkey.

The Red Bull Salzburg midfielder let fly from a full 35 yards out and hit set-piece hit the top corner of the net, leaving Ugurcan Cakir in the Turkish net completely stranded. 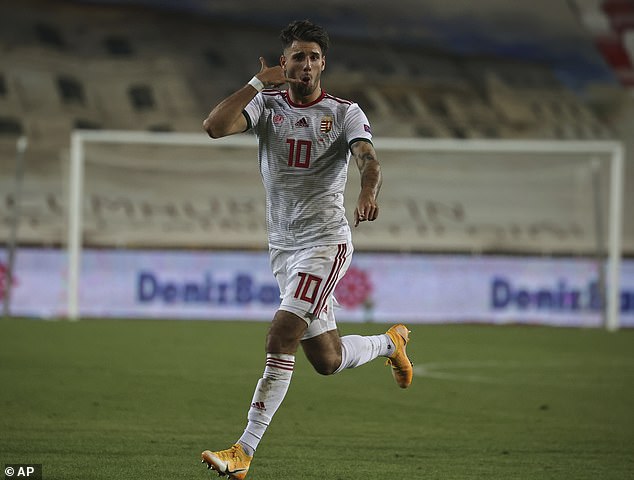 The result does not mean the Hungarian sit top of Group B3 as Russia claimed a 3-1 win over Serbia in Moscow thanks to a brace from Artem Dzyuba.

The 6ft 5 inch forward opened the scoring from the penalty spot, before Vyacheslav Karavayev doubled the Russians advantage.

Fulham striker Aleksandar Mitrovic pulled one back when just over ten minutes to play but Dzuyba had the last laugh two minutes later with a left-footed strike from outside the area. 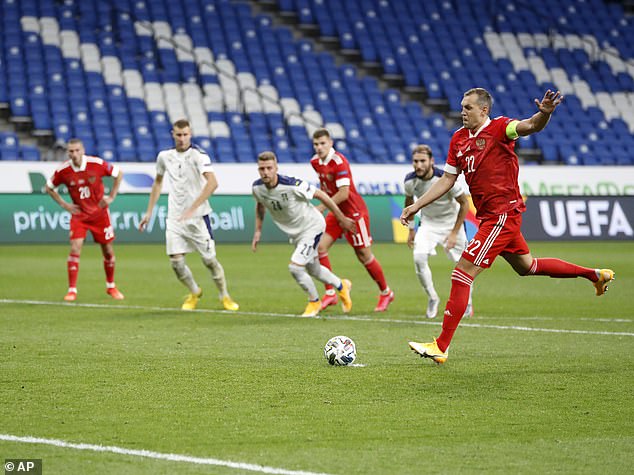 A brace from Artem Dzuyba, including one from a penalty, allowed Russia to beat Serbia 3-1

Meanwhile, the Faroe Islands scored two in the last three minutes of their match against Malta to complete a stunning late comeback in Torshavn.

The European minnows took the lead in the first-half through Klaemint Olsen but Malta equalised 12 minutes after the opener through Jurgen Degabriele.

Defender Andre Agius appeared to have sealed three valuable points for Malta when he netted with 15 minutes to go but striker Andreas Olsen scored with just three minutes of normal time remaining.

As the clock ticked into stoppage time, Brandur Hendriksson completed the late turnaround to spark delirium amongst his Faroe Island team-mates.

Meanwhile, Moldova and Kosovo shared the spoils with a 1-1 draw to begin their UEFA Nations League campaigns. Ion Nicolaescu gave the Moldovans the lead but Benjamin Kololli struck with 19 minutes to go to earn a draw.

The Republic of Ireland managed a 1-1 draw away at Bulgaria while Kieffer Moore’s goal was enough for Wales to beat Finland away from home.

The tie between Latvia and Andorra, along with the Slovenia against Greece match, ended goalless.

Newcastle set to bring in Norwich’s Jamal Lewis as full back...

Brian Laudrup: Why the Nations League is still a good idea...