PETE JENSON: Ousmane Dembele was once TWO hours late for training and has a reputation for loving video games and partying more than football… he’s a rare talent but do Manchester United REALLY want to take a risk on him?

If Manchester United go through with the loan signing of Ousmane Dembele, they’ll be acquiring a player whose speed and two-footed talent make him unplayable when he is at his best.

But they would also be getting someone whose dreadful luck with injuries make him a massive gamble.

United need a forward and Barcelona have a surplus. Dembele is the one they would be happiest to lose – his three years at the club have so far have been a financial embarrassment for them and an endless slog of set-backs for him. 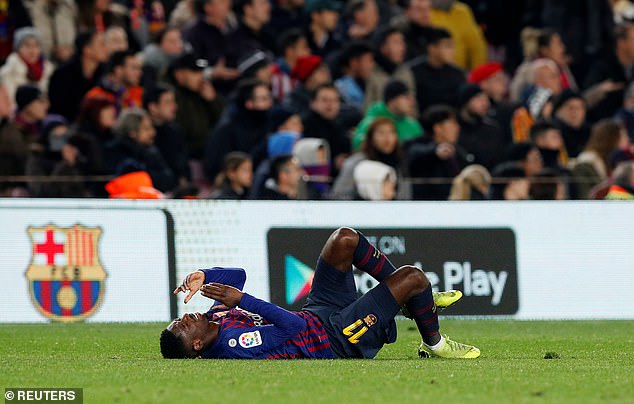 He was a second-half substitute in Ronald Koeman’s first game of the season on Sunday and he looked to be playing within himself when he came on. Wary of the two injuries that have stifled his progress at Barcelona, there seems to be a reluctance to throttle-back as he did when he arrived.

The 23-year-old ruptured the tendon at the top of his right hamstring last November and played no significant part in the rest of the season.

In September 2017 he suffered the same injury in his left leg and was out for four months. These are sprinter’s injuries and for a player whose pace played such a big part in making him the second most expensive signing in Barcelona’s history, they are potentially career-changing for Dembele.

Watching him effortlessly leave full-backs behind made fans and directors alike forget his disciplinary misdemeanors when he first joined. 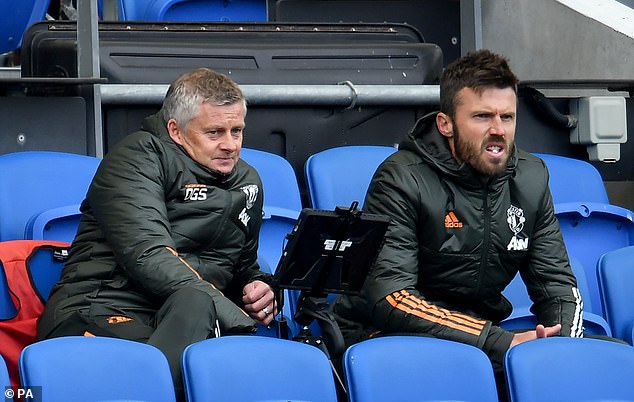 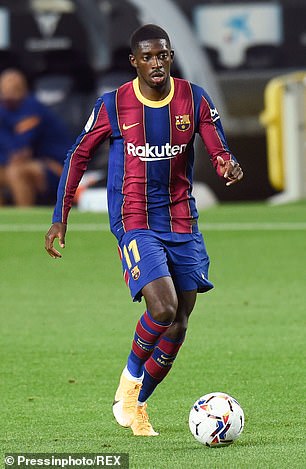 Under his first coach Ernesto Valverde, he once turned up two hours late for training. He called the club apologetically to say he had slept in and then drove to the training ground where he was put through his paces alone by the club’s then physical trainer, Edu Pons. He later stood up in front of team-mates in the dressing room and apologised for his actions.

The feeling has always been that his misdemeanors are born of immaturity, not arrogance. He has improved with time but now with disciplinarian Koeman in charge he was late again this week. This time is was not for training, but for the new clocking-in time an hour ahead of training that the Dutchman has imposed.

The old stories about Dembele rejecting the club’s imposition of a personal chef to help him take better care of his diet and his fondness for video games have given him a reputation as a wild-times player with little care for his profession. The goldfish-bowl existence of being a big signing at Barcelona have helped exaggerate those weaknesses.

Two seasons ago, Gerard Pique said: ‘We have to help him realise that football is a 24-hour thing. We have all been young and we have all made mistakes. I am convinced he will improve.’ Those words seemed to illustrate how his team-mates liked him and wanted him to grow-up and start fulfilling his potential. 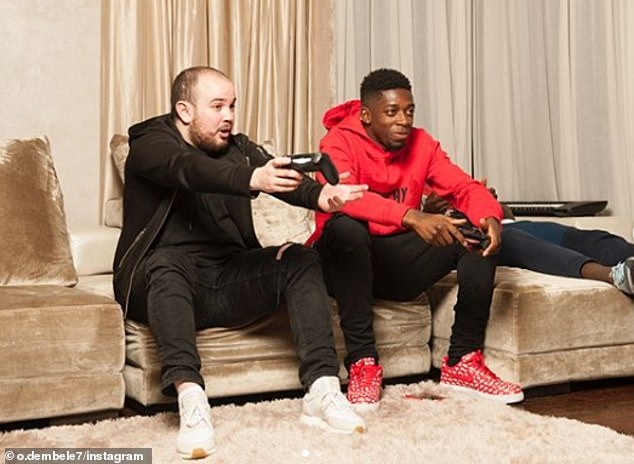 Dembele is a fan of video games and junk food, and has once arrived to training two hours late 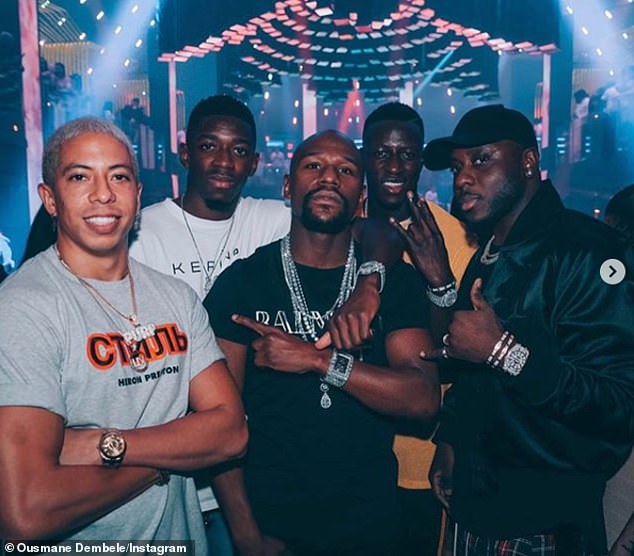 It’s hard for him to do that if he is not playing regularly and this season will go a long way towards deciding if his body has properly recovered from those two tendon injuries and left him with that extraordinary acceleration.

United must decide if they want those decisive weeks of his career to take place on their watch as they pay the French international’s wages.

Barcelona paid £96million to Borussia Dortmund in 2017 for Dembele and are currently still making their way though an additional £35m of add-on payments. He is one of a holy trinity of hugely debatable investments. Philippe Coutinho and Antoine Griezmann being the other two.

If United decide that the forward they buy does not have to be a winger then Griezmann actually makes far more sense and certainly represents a far safer bet if they could persuade him to leave the Nou Camp. 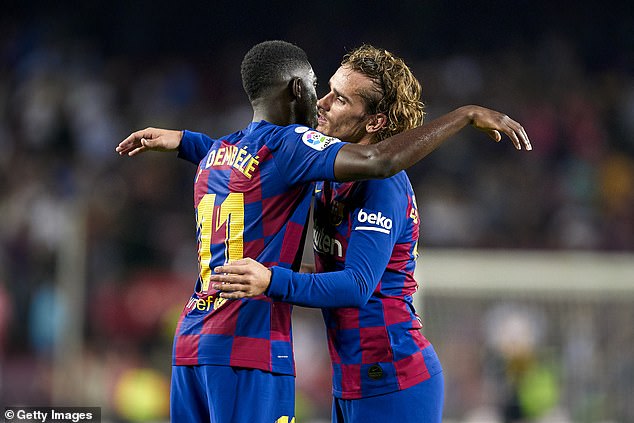 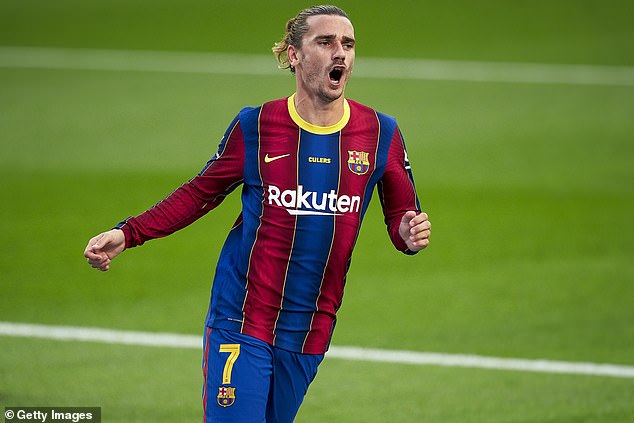 He has none of the disciplinary foibles of Dembele, nor does he suffer from the same injury problems. In the past he has indicated that, despite his brother supporting Manchester United, he has no intention of abandoning his plan to be a success at Barcelona. He has inherited the No 7 shirt this season but still looks like a player who would thrive at a club where he is the focal point of the attack.

He did start at the weekend but he was taken off in the second half and it remains to be seen how a plan to have him dove-tail with Lionel Messi – the pair effectively interchanging right wing and false nine positions – will work this season.

Barcelona’s current financial situation certainly means they can’t be too selective about who they allow to leave so if United’s focus switched to Griezmann they wouldn’t be sent away. Only 17-year-old Ansu Fati is out of bounds.

For now their interest seems to be on Dembele; though not quite the ‘poised to sign him for €60m’ type of interest that was optimistically circulating in Barcelona on Tuesday.

A loan is as far as they should go for a player who will terrify defenders once again, just as soon as he regains the confidence that a sustained period without injuries will give him.

Chelsea are box office! Sportsmail one of FIVE watching at the...

Ansu Fati has more goals before 18 than Lionel Messi, so...