Tottenham held their lead here for 85 minutes. So they almost got there. They almost did enough to earn a win that would have taken them third in the Premier League.

But no matter how hard they work, how organised they are and how well they defend, life on a football field tends to be increasingly difficult for teams that don’t have the ball.

And that was Tottenham’s problem here. It is becoming a hoary old theme, we know. Jose Mourinho and anti-football. So it is important to stress that this was not about that. This was merely a story of a team who led early but as time wore on could not obtain enough of the ball to control the destiny of the game. That, at the moment, is Tottenham’s greatest failing and it is hard to escape the feeling that over time it will hold them back.

Wolves snatched a point at home to Tottenham in the 86th minutes on Sunday, with Romain Saiss flicking-in from a corner 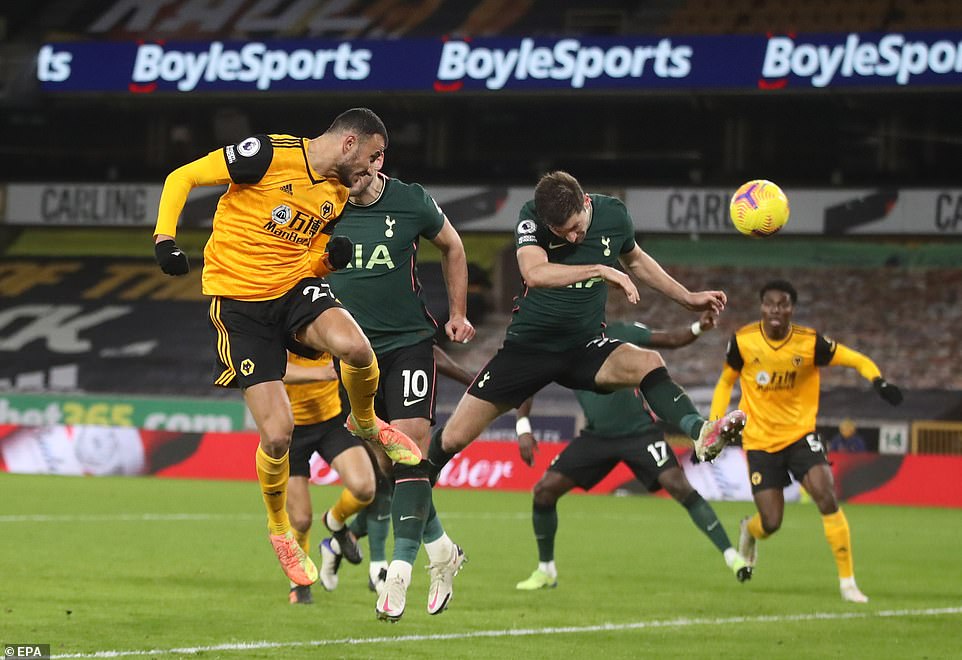 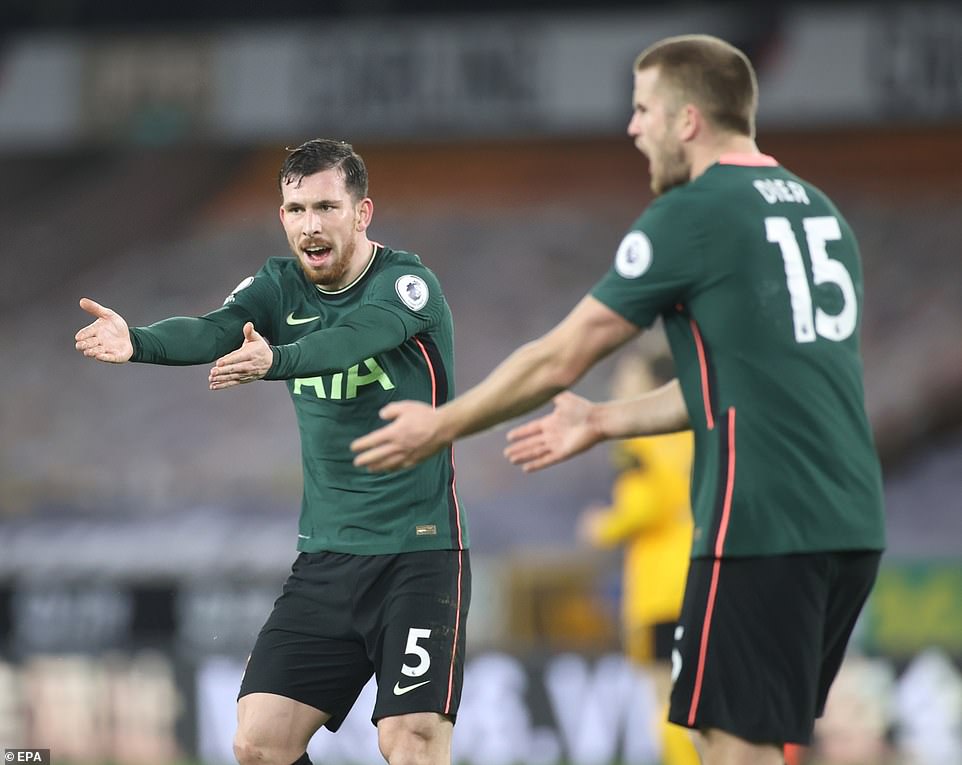 Spurs’ plan nearly worked but they ended-up missing the chance to go third in the Premier League, but moved up to fifth

For a while, after Tanguy Ndombele rammed in a goal from 18 yards after just a minute, Spurs were the better team. They held sway in the centre of the field and attacked quickly and with intent. They were impressive and Ndombele was particularly influential. A second goal then would probably have won the game and it looked likely for a period.

But as time wore on and a capable Wolves team found a way into the game, Tottenham’s control was lost. For the last hour of the game Wolves were the better team in every department and by the time defender Romain Saiss headed in the equaliser with four minutes of normal time remaining all the vital stats were in the home team’s favour: possession, shots, corners.

So Mourinho’s Tottenham remain a bit of a puzzle. Maybe it’s a London thing. It’s becoming quite hard to work out Lampard’s Chelsea, Arteta’s Arsenal and Moyes’ West Ham too.

MAN OF THE MATCH: Romain Saiss 6

Tottenham at least didn’t lose and they could have done. In the last minute of added time, a cross from the left landed perfectly on the head of forward Fabio Silva but the teenager — game as he is — had not enjoyed the best of nights in the vital areas and he made only the lamest contact on the ball and Hugo Lloris was able to save.

So Mourinho at least was not left having to answer questions about three league defeats on the bounce. He could talk instead about how close his team were to the victory that would have taken them to third place. Strange season, this one.

Wolves, for their part, will have been happy with their point. Raul Jimenez was in the stands here after recovering from that dreadful head injury he suffered against Arsenal. 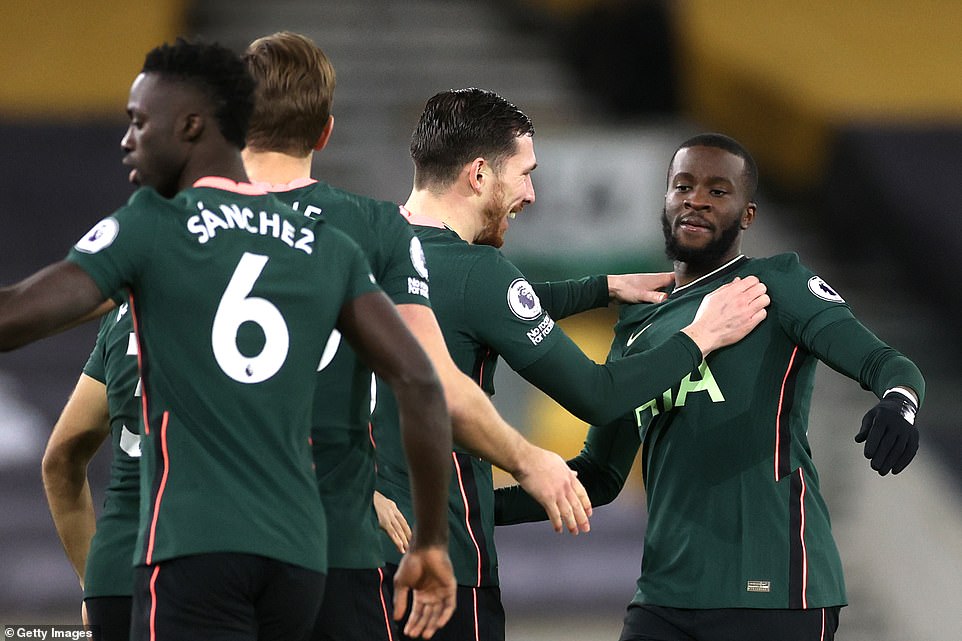 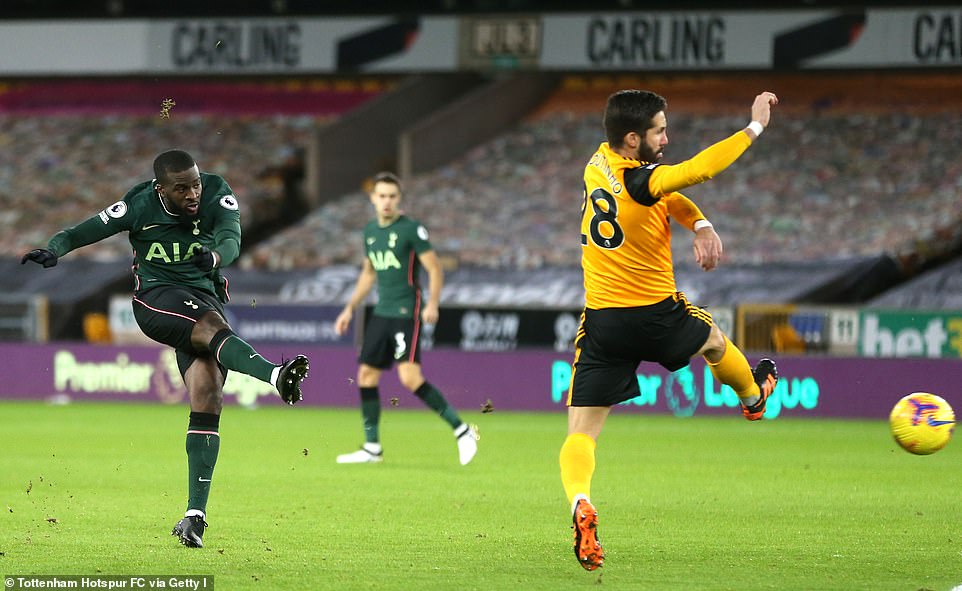 The midfielder scored with essentially Spurs’ first chance, with his bobbling effort beating Rui Patricio, who should do better

His health is all that fundamentally matters but the truth is that Wolves miss him on the field. Goals are hard to come by for Wolves this season and their struggles in that department were apparent once again on a cold night at Molineux.

Early on, Tottenham were fluid and their goal was straight forward. Son Heung-min ran on to a fairly innocuous long pass to draw a save from Rui Patricio at the near post after only 25 seconds. Then, when the corner was only half cleared, Ndombele drove the ball first time low in to the net to the goalkeeper’s left.

Ndombele, slow to start his Spurs career, was a threat, sensing opportunities well in the middle of the field and using his quickness and strength to make the most of them. 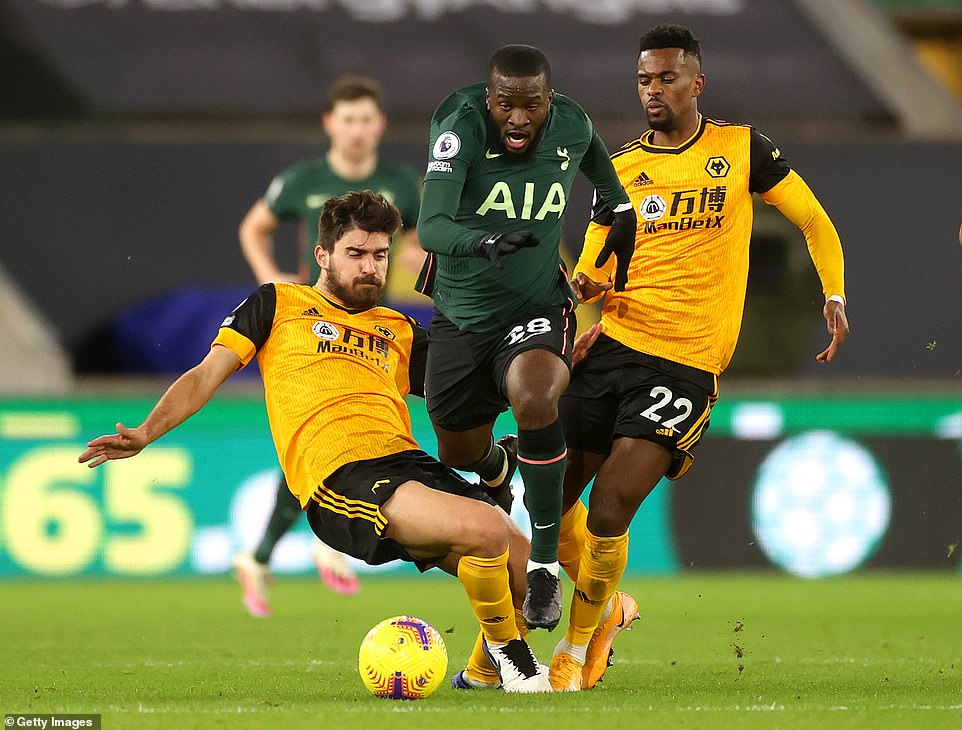 Ndombele had an impressive display until being substituted for Sissoko, continuing to impress after a rough start at Spurs 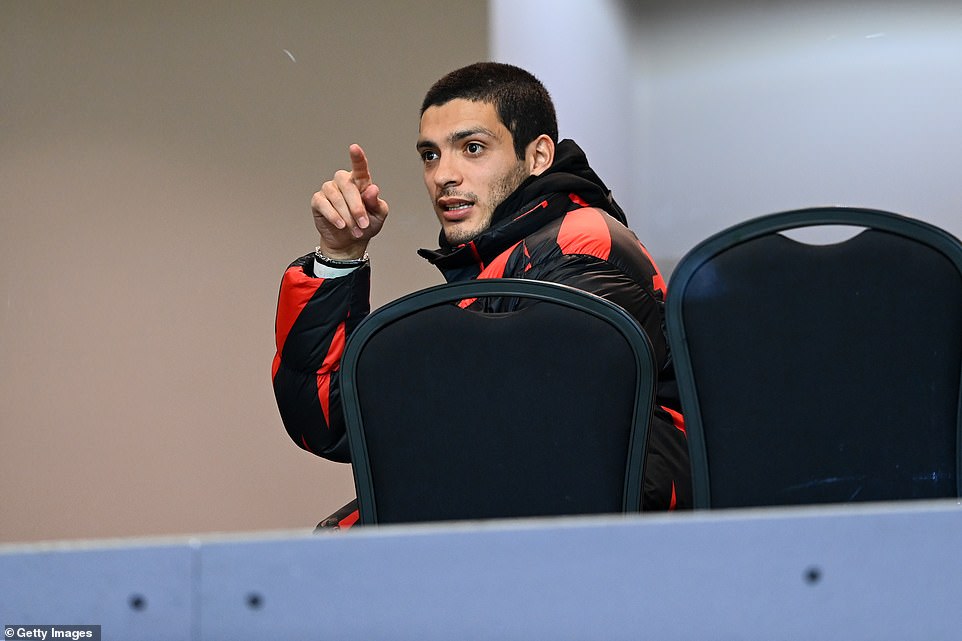 Twice inside 20 minutes he set up good chances for left wing-back Sergio Reguilon. First he joined in a break building down the right and crossed accurately for Reguilon to head wide. Then, six or seven minutes later, he won the ball deep in his own half, surged through the middle to feed Reguilon on the left and was doubtless disappointed to see the ensuing shot struck quite tamely at the goalkeeper.

That was the pattern of the game for a while. Wolves were struggling to develop any dangerous play despite having plenty of possession while Spurs carried a threat whenever they entered the final third of the field.

But when it changed, Spurs were unable to shift the momentum back their way. Wolves worked Lloris twice through Daniel Podence in the first half and then Silva hit the side netting at the near post after starting a move on one side of the field and almost finishing it at the other. 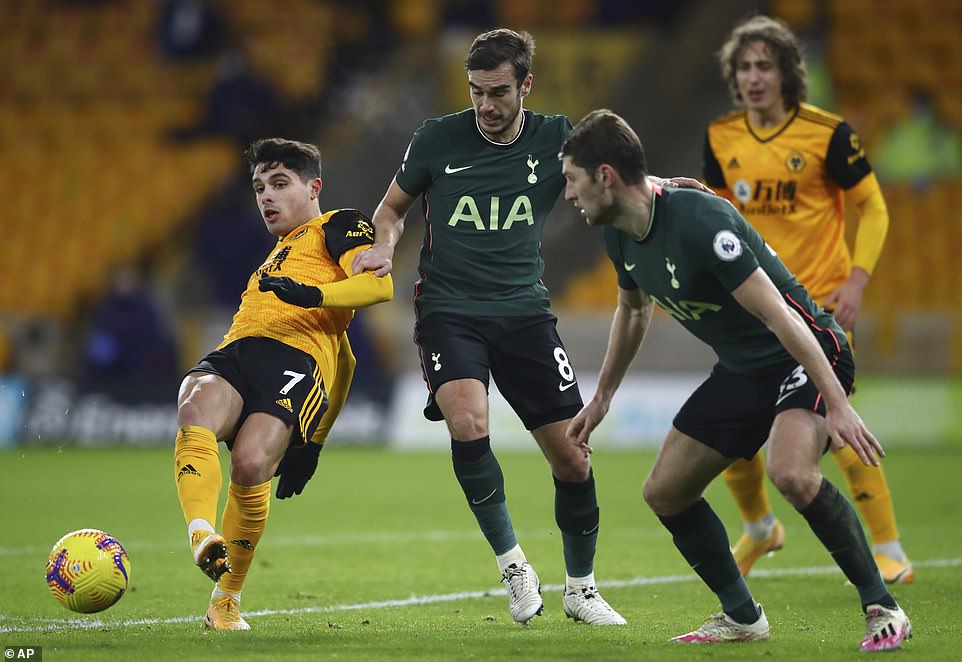 There was minimal action, particularly in the second-half, as Spurs’ defensive organisation prevailed over Wolves’ attack 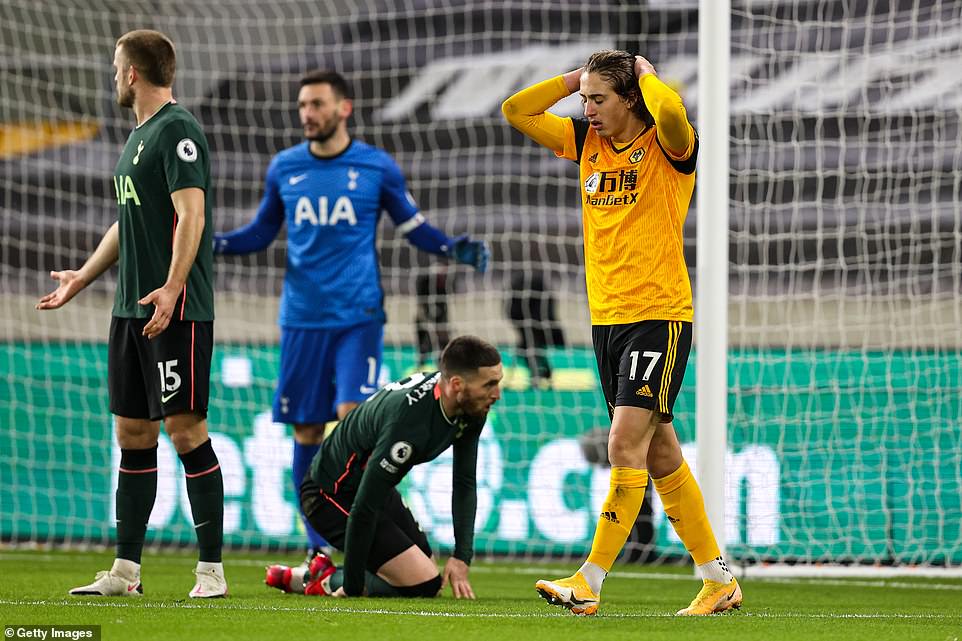 Fabio Silva missed a huge chance to win it at the death with a poor header, as the youngster struggled in front of goal

That was the teenager’s best moment though he could have won a penalty in the first minute of the second half. Eric Dier appeared to catch his heel but a corner was given and VAR concurred.

The second half belonged to Wolves. It was never a siege but the pressure was consistent. They threatened on occasion from distance and then, after heading one corner at the goalkeeper, Saiss refused to pass up an identical chance and scored the goal his team deserved in the 86th minute.

Whether this was a good result for Tottenham depends on your point of view. But on a weekend when other big teams lost, it felt like an opportunity had slipped by. No matter your tactics, good teams can keep the ball when they really need to. Mourinho’s Tottenham are yet to show us that. 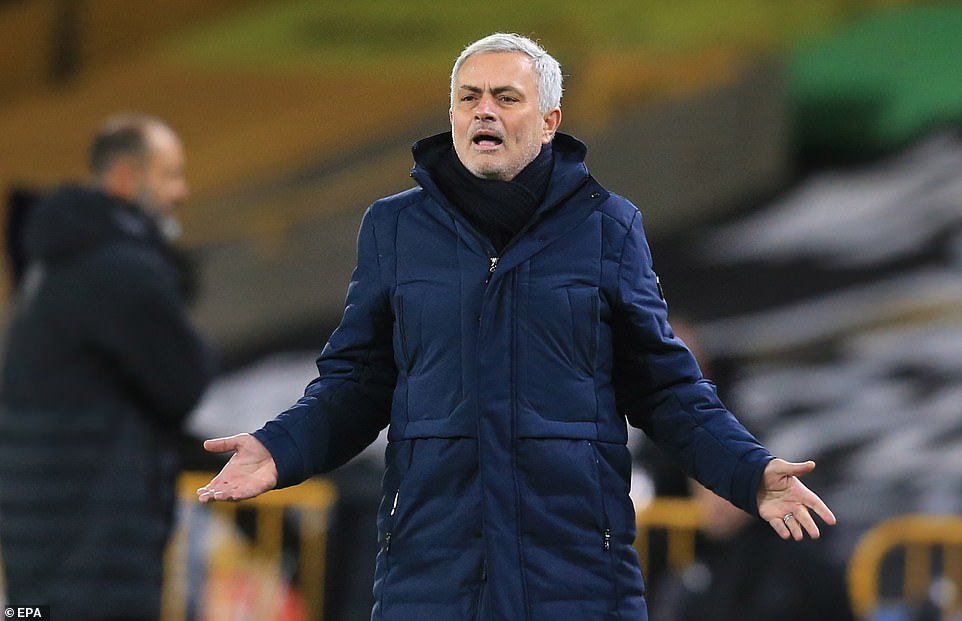 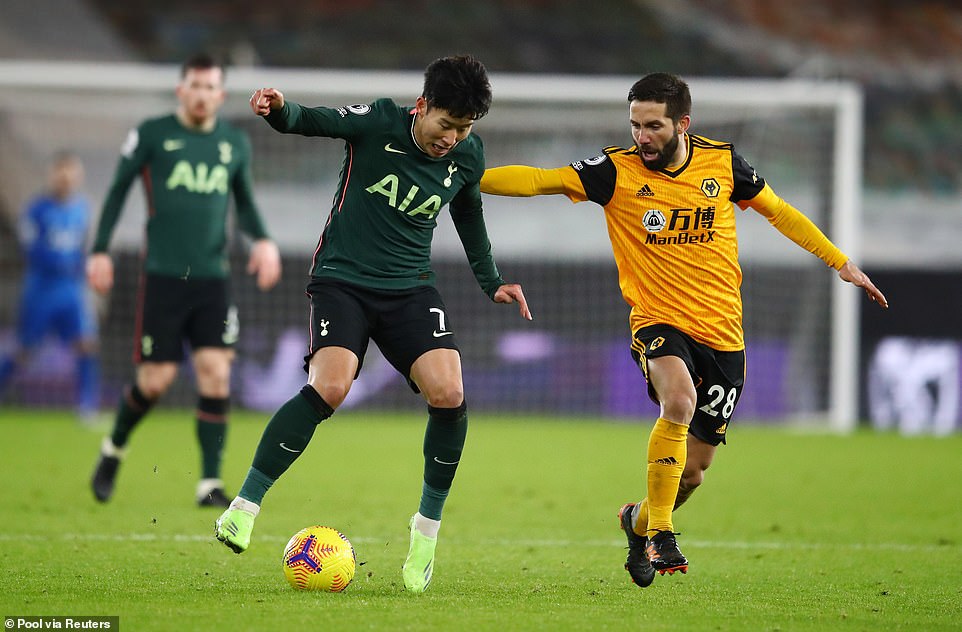