Sportnews
Home Ligue 1 All eyes were on Lionel Messi as he made his PSG bow... 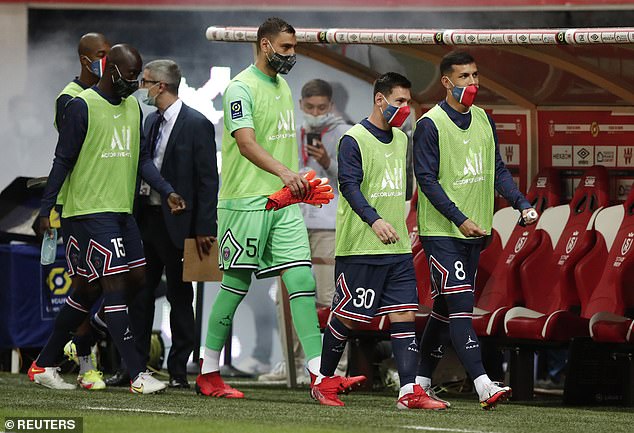 The little man who the world had come to see was leaning against a wall, twirling a blue-and-red face mask around his finger. At first glance, you would have thought he was totally at ease.

In those tense moments before kick-off, though, Lionel Messi could be seen continually rubbing his lips together and occasionally gulping. There was a point, too, when he sidled behind the hulking figure of Gianluigi Donnarumma, as if he was seeking shelter.

Forget the telephone number salary, if you can, and the adoration he is afford from Buenos Aires to Barcelona and all points in between. Here was a snapshot of a man feeling nervous and vulnerable, the anxieties that flood through on the first day in any new job. 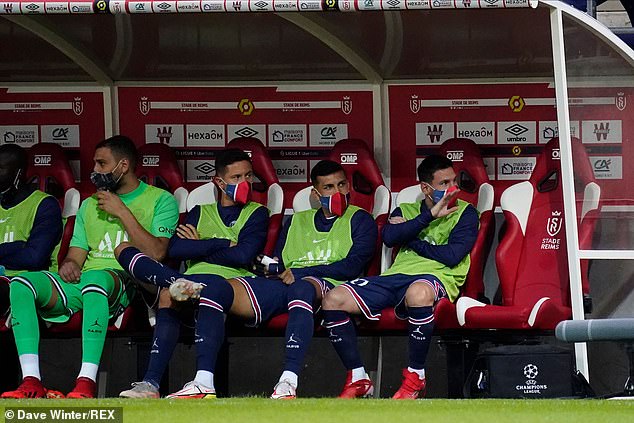 Messi is no stranger to scrutiny, so he would barely have batted an eye at the three photographers who strategically positioned themselves around the Paris St Germain bench like marksman and began click-click-clicking to get the perfect shot, as he took his place with the other substitutes.

But for him – and the rest of us – there is a need for readjustment. Those days when he sped across the pitch in Camp Nou, as if being controlled by a joystick, are over and the expectation now is that he will keep casting spells in France.

We must say ‘expectation’: it doesn’t matter that he is 34, Messi’s name invites you to enter a world where fantasy with a football can become reality. We all have our memories of him, those nights when he has made you leap from your chair in wide-eyed wonder.

Everyone with a love of this sport will understand that point and to be in Reims on Sunday reinforced it; Reims was were French Kings had their coronation ceremony from 1027 and 1825 and Messi’s first appearance in Ligue 1 felt as if royalty had returned to the city. 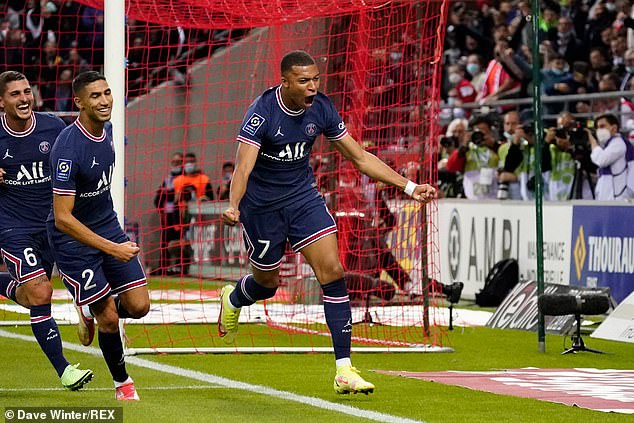 Mbappe (R), who could move to Real Madrid by Tuesday, celebrates after scoring the first goal

Fittingly, L’Equipe devoted its front page to Messi yesterday with a huge headline on a picture of him declaring: ‘Un Roi A Reims’ and thousands had descended to see his anointment, lining the streets to hopefully get a glimpse of him.

The crowd around the main entrance was 10-deep as the PSG team bus trundled into the stadium at 705pm, the increased crowd leading to burly security guards looking progressively frazzled as they tried to keep order and barked instructions into walkie-talkies.

He was cheered when he bounced down the stairs of the bus – Neymar, by contrast, was loudly booed – but that was nothing until manager Mauricio Pochettino finally gave him the nod to stretch his legs, 57 minutes into the game.

Ask yourself what happens at English stadiums when a big name signing from the opposition begins his warm-up – there is booing, gesticulating and someone will jump from their seat to screech expletives. It might be different when Cristiano Ronaldo shows up but don’t bet against it. 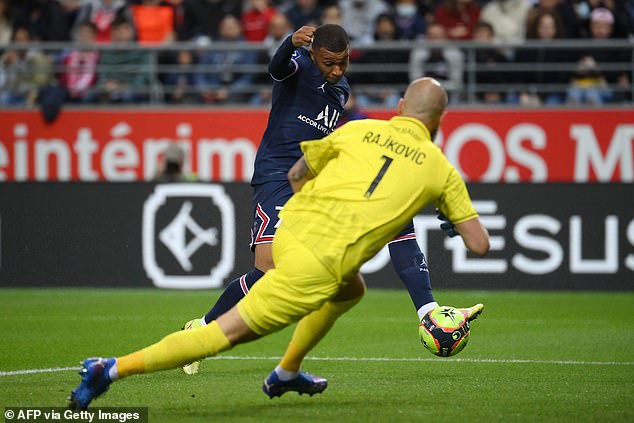 The France forward makes no mistake with the second, slotting in before Messi joined the fray

Here? The Reims crowd began chanting ‘Messi! Messi! Messi!’, with many in ripping out their mobile phones to get a digital souvenir. The ovation was even louder when he got onto the pitch in the 60th minute, they even roared when he completed his first three passes.

Reims had been inundated with requests to accommodate media organisations – there were 120 present, plenty more missed out – and officials said the last time they could remember such a frenzy was when David Beckham played his second match for PSG in March 2013.

There was a shock that night, with Reims winning 1-0 – Beckham, like Messi, was introduced from the bench – but you could tell, even when watching the warm up, that that history would not be repeated.

Messi, along with the rest of the other substitutes, remained in the dressing room as Pochettino stood on the sidelines and watched this expensively assembled team go through their paces and nobody sparkled more than Kylian Mbappe. 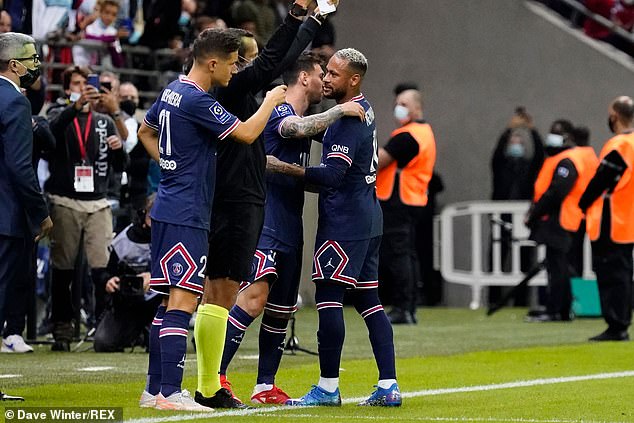 Perhaps his inclusion in the starting line-up was the most emphatic answer to the question of whether Real Madrid will be successful in their relentless attempt to sign him. Mbappe might want to go to Spain but his attitude faultless, his efforts in the warm up worth the price of a ticket alone.

In one shooting drill, he was picture perfect – right foot, left foot, top corner, bottom corner – and the prospect of him dovetailing with Messi and Neymar is filled with the potential of them amassing PlayStation scores when it all clicks.

‘Will Mbappe stay?’ said Pochettino. ‘Well, he’s our player. The football industry is full of rumours. Our chairman and Leonardo are very clear. He is here with us. I am very happy to have him. He is one of the best. It’s a gift.’

Mbappe was the star of the evening, the man most likely to score from a very early stage. In the 10th minute, he dragged a shot wide but Reims were not anywhere near so lucky in the 16th minute when the majestic Angel Di Maria – how did it not work for him at Manchester United? – picked him out. 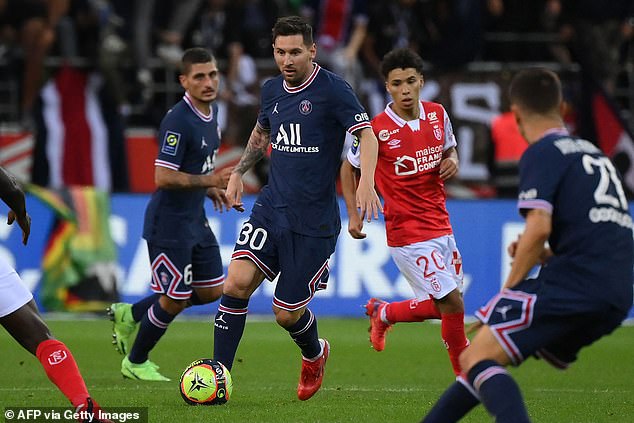 Complacency was going to be PSG’s biggest for from there and there was relief when VAR ruled out what would have been an equaliser for Marshall Munetsi early in the second period. Pochettino’s look at his defence could be best described as angry father who had seen one of his children break the greenhouse window.

Fortunately, the glowering did not last long. Almost immediately, Paris broke away and Achraf Hakimi, the right-back for whom they paid a king’s ransom to Inter Milan, delivered a glorious ball to the back post that Mbappe gleefully dispatched.

With the game won, it was time for Messi. Again, you could see nerves in his first couple of movements, going back to the basics of just wanting to complete his first couple of passes – one went to Hakimi, another went to Marco Verrati – but then his instincts kicked in.

Yunis Abdelhamid, the Moroccan captain of Reims, bunbled Messi over as he tried to make a run forward. It was duly noted and, at the next opportunity, Messi responded by thundering into Abdelhamid, casting a quick, ruthless glance behind as he dashed towards goal. 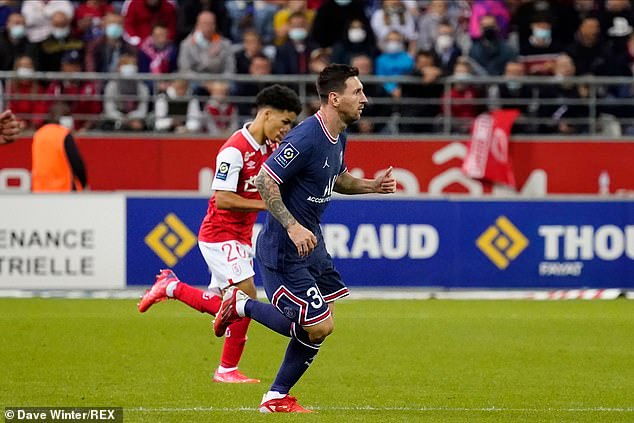 There would be no dream start in the shape of him opening his account – he didn’t even get a chance to test Reims goalkeeper Pedrag Rajkovic and he is clearly well short of peak condition – but it will not lead him to lose sleep.

What was important here was simply the opportunity to get going. No matter how many centuries an opening batsman has, they always feel better when nudging that first single in their next innings. All sportsmen are the same and while Messi has a gift from God, it doesn’t make him different.

‘He was very good from the moment he entered the pitch,’ Pochettino said generously. ‘Every time he touched the ball, he spread calm throughout the team. It’s important even for Lionel Messi to win on his debut.

‘The welcome he got was beautiful to see and hear, not just from our fans but also from Reims. He has earned that. He can radiate an optimism and energy that everyone can feel and that can have a positive influence on the other players. He is Messi.’

And he has not finished yet. Not by a long way. 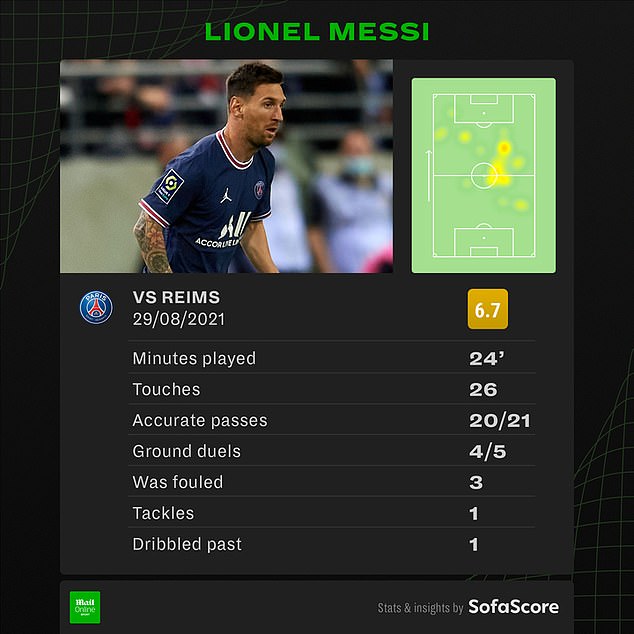