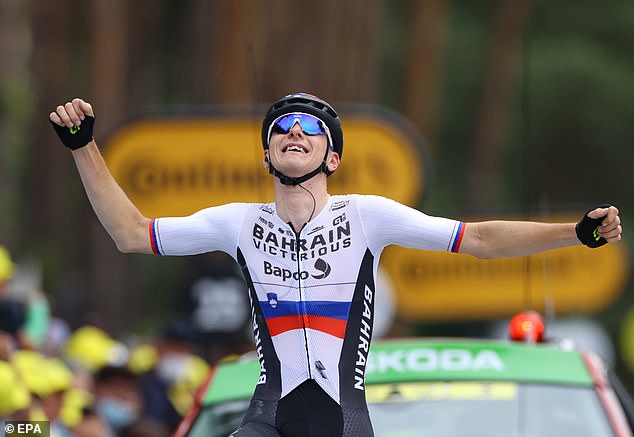 Slovenia’s Matej Mohoric powers to his first stage win in the Tour de France… but Mathieu van der Poel extends his lead in the yellow jersey to 30 seconds!

A long and painful stage to end a long and painful first week of the Tour de France. One that should call time on Primoz Roglic’s hopes but ended with a first victory for his fellow Slovenian, Matej Mohoric.

Not for 21 years has the race moved further in one day than in stage seven on Friday, when Mohoric won over 249.1km between Vierzon and Le Creusot.

It proved too much for Roglic, second last year and one of the favourites this time round. He crashed on stage three and cracked towards the end of a brutal ride that included climbs of more than 3,000m.

He lost nearly four minutes on defending champion Tadej Pogacar, who finished alongside other contenders including Geraint Thomas and his Ineos team-mate Richard Carapaz.

Mathieu van der Poel finished fourth to retain the yellow jersey. His lead over Belgian Wout van Aert is 30 seconds, with Mohoric climbing to fourth, three minutes off the pace. Pogacar is a further place and 42 seconds back, with Carapaz 12th. Thomas, who sits 13th, clung on to his rivals but there were ominous signs before the race heads into the Alps.

‘The last 80km was hard, I was just suffering,’ said 2018 winner Thomas. ‘It takes a lot just to get through each day. At least I stayed in there.’ 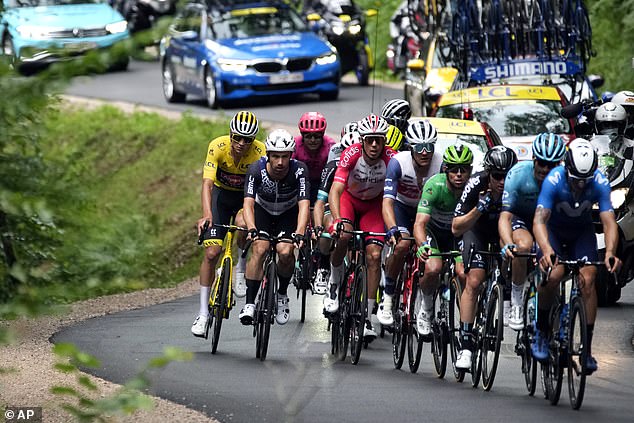 Mohoric, of Bahrain Victorious, was part of a big breakaway group that included Van der Poel and Britain’s Mark Cavendish — who strengthened his own grip on the green points jersey.

But the Slovenian pulled clear and reached Le Creusot one minute and 20 seconds ahead of Belgium’s Jasper Stuyven.

‘I didn’t think I could make it into the last climb,’ Mohoric admitted. ‘Kilometre by kilometre I was still feeling OK. I couldn’t believe it.

‘I knew it was a good stage for me. I’ve won at the Giro and Vuelta, but this is the Tour — it’s the biggest race.’