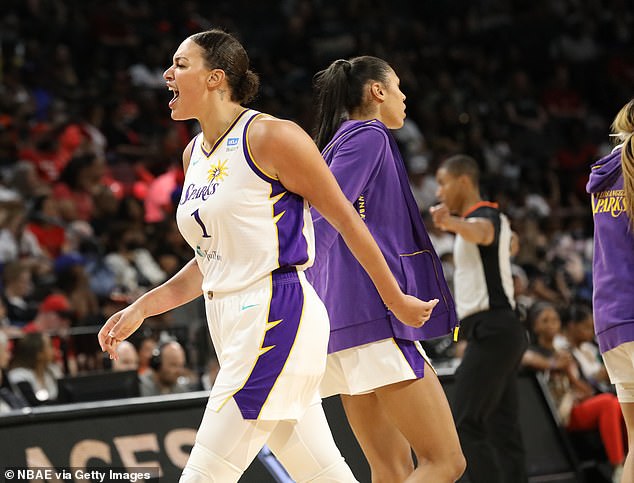 More details have emerged around Australian WNBA superstar Liz Cambage’s axing from the Los Angeles Sparks on Tuesday, with reports she threw a tantrum before later storming out of the dressing room.

The 30-year-old basketball superstar’s sacking could bring an end to a storied WNBA career that includes four All-Star selections and the record for most points in a game.

Her last game for the side was on July 23 against her former team, the Las Vegas Aces, and resulted in a disappointing 84-66 loss.

Sources close to the situation say Cambage was openly and verbally unhappy with her teammates during the game for not getting enough post touches, according to Yahoo Sports.

A post touch occurs when a player gets the ball with their back to the basket between the free-throw line and baseline and tries to use their height, positioning and strength to score.

Liz Cambage yells during her last game for her WNBA team, the Los Angeles Sparks, against Las Vegas on July 24 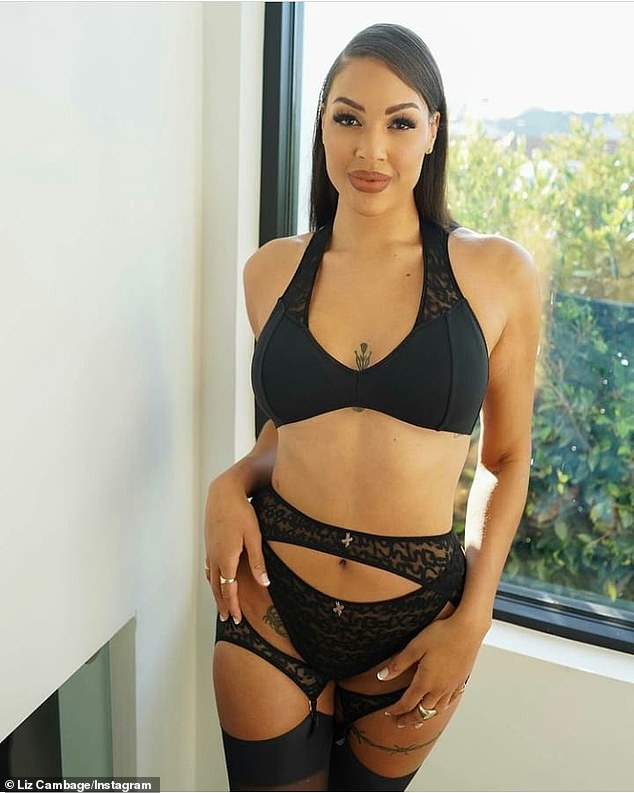 Given the behaviour had happened previously, fed-up teammates then began passing her the ball as often as they could, regardless of what the situation or tactics called for.

The 203cm Australian then made a beeline for the locker room to make an early exit from the game, and reportedly told her teammates she’d had enough.

‘I can’t do this anymore. Best of luck to you guys,’ she said, according to sources. 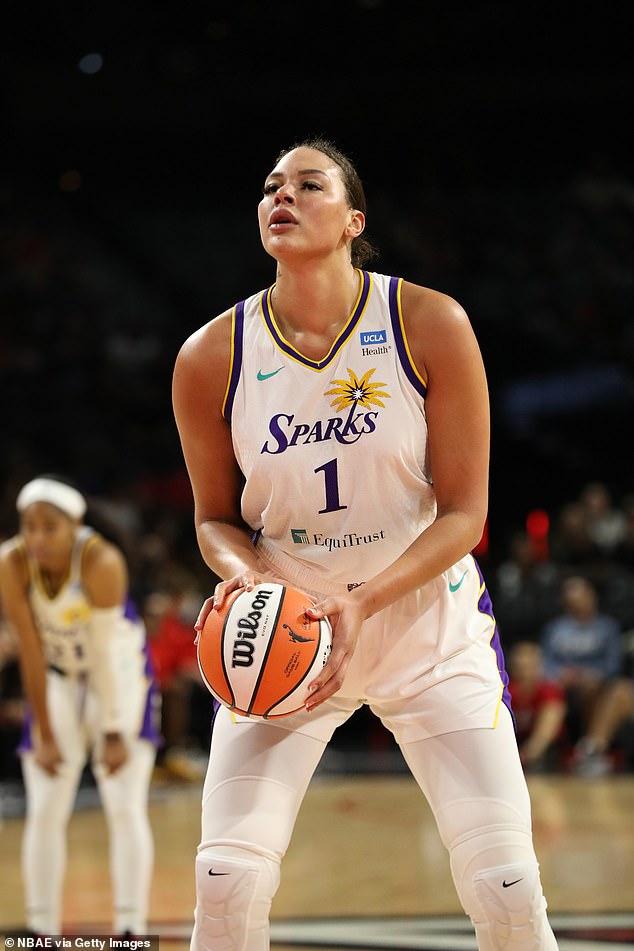 It led to whispers that she’d quit the club, before the Sparks set the record straight on Tuesday.

‘It is with support that we share Liz Cambage’s decision to terminate her contract with the organization,’ Sparks Managing Partner Eric Holoman said in a statement.

‘We want what’s best for Liz and have agreed to part ways amicably. The Sparks remain excited about our core group and are focused on our run towards a 2022 playoff berth.’

Cambage joined the WNBA powerhouse as a free agent in February, but her short stint has been mired in controversy right from the start. 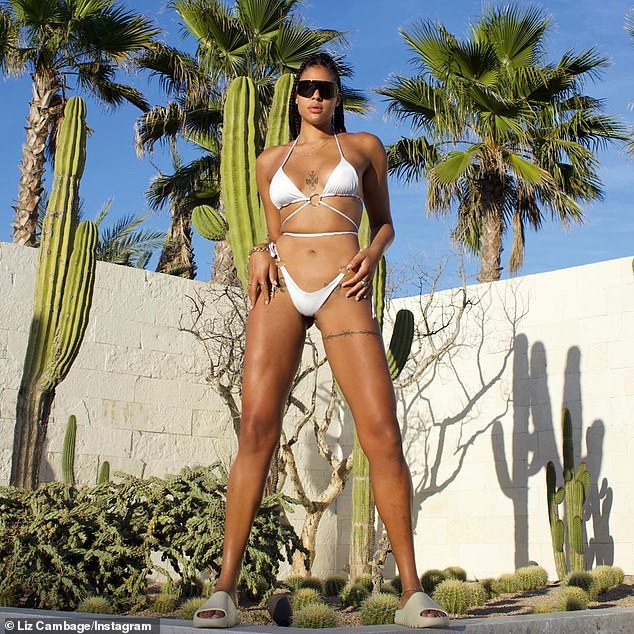 She couldn’t get either of the playing numbers she wanted, before the club intervened and took the number one jersey off Amanda Zahui B. without telling her, which left both Zahui and their teammates disappointed.

Zahui then found herself suspended, without pay, for the rest of the season in an unrelated move.

It is also understood Cambage would often call her teammates out in video review sessions, but perhaps the most impactful incident on the club’s deteriorating culture was her alleged racial slurs to Nigerian players prior to the Tokyo Olympics. 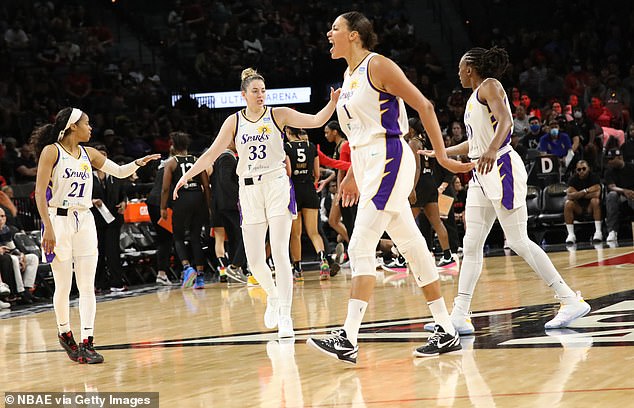 Cambage’s now infamous alleged racial slurs came during a pre-Olympics scrimmage between Australia and Nigeria, in which the Aussie also sparked a couple of brawls.

Opals teammates and members of the Nigerian team alleged Cambage called her opponents ‘monkeys’ and told the entire side to ‘go back to your third world country’ during a time out.

Cambage, who is half-Nigerian, has continued to deny the allegations. 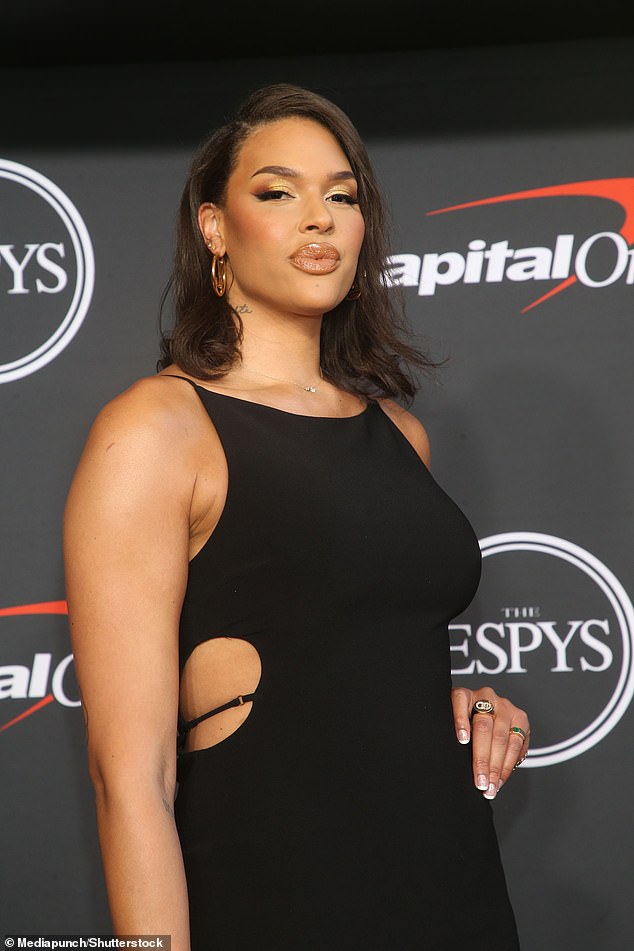 Among her teammates at the Sparks were Nigerian-American sisters Chimey and Nneka Ogwumike.

Team chemistry was reportedly not the reason Cambage and the Sparks parted ways, according to a PR Firm she has been associated with – but those claims have since been hotly disputed.

Prior to reports surfacing about her on-court tantrum and dressing room blow-up, footage emerged of Chimey looking anything but friendly with her at a recent press conference.

Liz Cambage: “It’s nice to be back. I’m just happy to be here at the moment,” said Cambage when describing her third time testing positive COVID on July 14. This interview is from July 21, which was her second to last game as a member of the Los Angeles Sparks. #WNBATwitter pic.twitter.com/oY19k3PQhg

As Cambage discusses her recovery from a third bout of COVID, Ogwumike can be seen rolling her eyes and shaking her head, very obviously unimpressed with her teammate.

Teammate Brittney Sykes was sandwiched between the pair at the press conference, and also appeared to be very unimpressed – though her reaction was not as overt as Ogwumike’s. 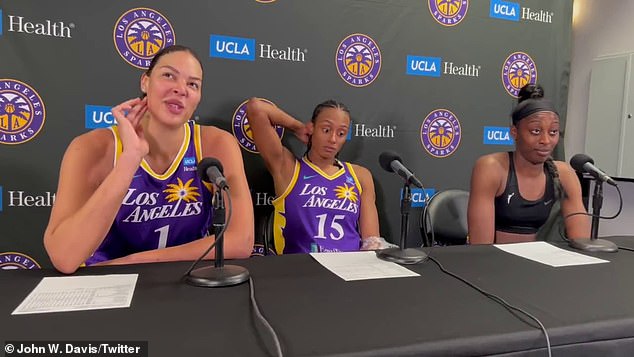 Many would say the facial expressions of Liz Cambage’s (left) teammates Brittney Sykes (centre) and Chimey Ogwumike (right) sums up the reaction of many WNBA players, fans and pundits to Cambage’s implosion

Despite all of the attention on Cambage, the Los Angeles Sparks have struggled since winning the Western conference in 2019.

The club finished a disappointing sixth in the conference last season, and have the underwhelming record of 12-15 this year so far.

Their practice location has been described as the worst in the league, and head coach/general manager Derek Fisher was fired in June – and losing Cambage will be yet another blow.

So what’s next for Cambage? 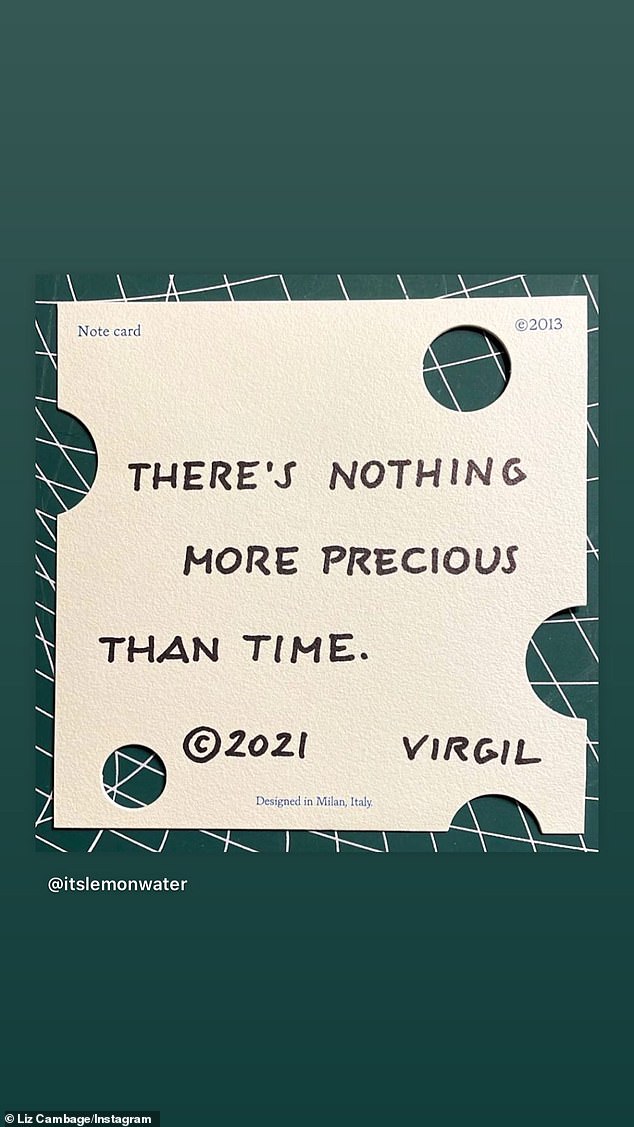 The Sparks were the only club interested in signing her so it is likely her highly successful, albeit stop-start, WNBA career has now ended.

She isn’t short of a side hustle, however, with an OnlyFans account, modelling career, vitamin business and DJ skills to fall back on.

Since-axed coach Derek Fisher ominously forewarned of the disaster that was about to unfold just prior to the 2022 season starting.

‘Is it going to be great? Or is it going to implode?’ he asked on the team’s preseason media day, according to the Los Angeles Times.