Sportnews
Home Champions League Pep Guardiola got it badly wrong in Porto and paid price but... 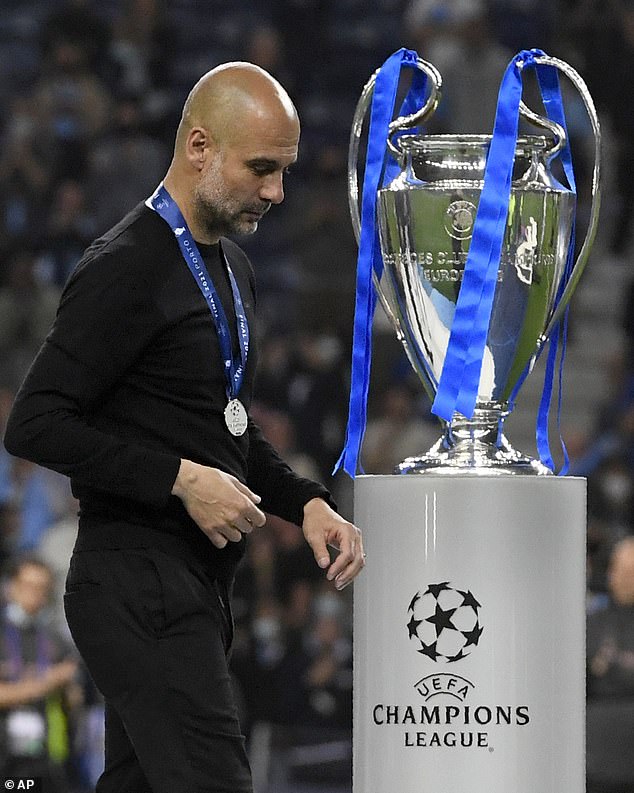 Pep Guardiola’s tactics in Manchester City’s Champions League final defeat by Chelsea have taken a hammering after the Catalan’s decision to start without any holding midfielders badly backfired.

Guardiola’s penchant for free-flowing football is well known, but even an attacking ideologue such as him understands the need for a midfield anchor to get the best out of his side.

Sergio Busquets was one of the most important players in his all-conquering Barcelona side, he turned long-standing fullback Philipp Lahm into a holding midfielder at Bayern Munich, while Fernandinho has been a vital part of his City team over the last five years. 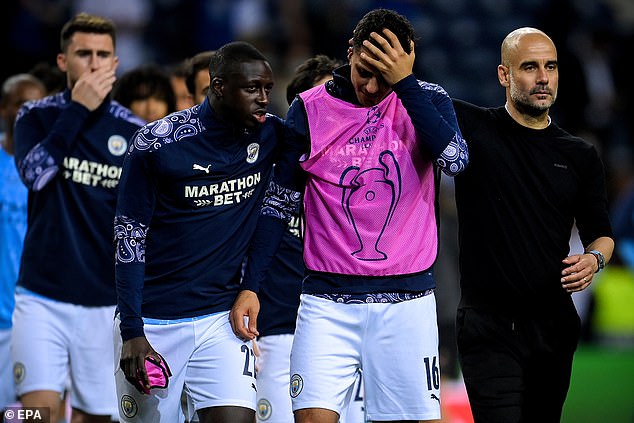 That’s why it was so baffling to see his side line up without the Brazilian or Rodri in Saturday’s final in Porto, and little surprise that Chelsea bossed the midfield battle as they won 1-0.

But even though it was remarkable to see Guardiola make such a mis-calculation in his biggest game for a decade, it wasn’t a huge surprise given his habit of over-thinking his team selections in big Champions League matches.

Here, Sportsmail recalls the other big moments in Europe’s top competition where Guardiola got it badly wrong.

Guardiola faced a semi-final showdown with old foes Real Madrid in his first season as Bayern Munich coach in 2013-14 and while his side dominated possession in the first leg at the Bernabeu, they were beaten 1-0.

It was a slender scoreline that Bayern, who were defending champions, were confident of overturning back at the Allianz Arena.

But Guardiola threw his usual principles out the window for the second leg, fielding four forwards from the start at the expense of a balanced midfield. 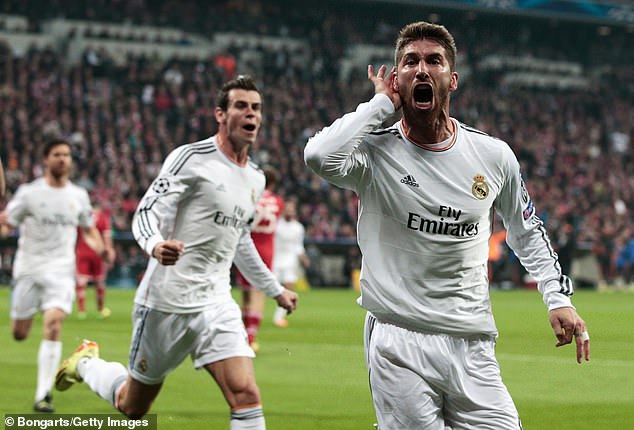 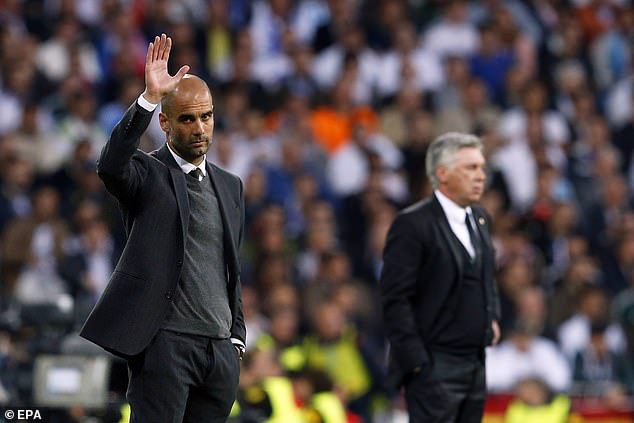 Dante and Toni Kroos were his only midfielders as the coach went out all guns blazing with a front four of Arjen Robben, Mario Mandzukic, Thomas Muller and Franck Ribery.

Journalist Marti Perarnau recounted the episode in his book Pep Confidential, revealing what Guardiola said in his pre-game team talk.

‘Lads, this is not about going out and having a good time. You are going out there to do some damage. Go for the jugular. You are German, so be German and attack,’ he said.

But the unbalanced team was all too easy for Real to overcome, as they raced into an early lead with two headers from Sergio Ramos before Cristiano Ronaldo added a third on the counterattack then made it 4-0 with a free kick.

After the game, Guardiola was livid with himself for listening to his players misguided pleas to use attack as the best form of defence.

‘I got it wrong man. I got it totally wrong. It’s a monumental f**k up. A total mess. The biggest f**k up of my life as a coach,’ Guardiola said in his office after the game, according to Perarnau.

‘I spend the whole season refusing to use a 4-2-4. The whole season. And I decide to do it tonight, the most important night of the year. A complete f**k up.’

MAN TO MAN IN BARCELONA

As if scripted, Guardiola’s next semi-final with Bayern was against Barcelona, offering him a first trip back to the Nou Camp, where he was an idol as a player and then a coach.

Bayern were depleted by injuries while Barca’s dream front three of Lionel Messi, Luis Suarez and Neymar was just catching fire, yet Guardiola decided to play a back three to counteract the deadly ‘MSN’ trio. 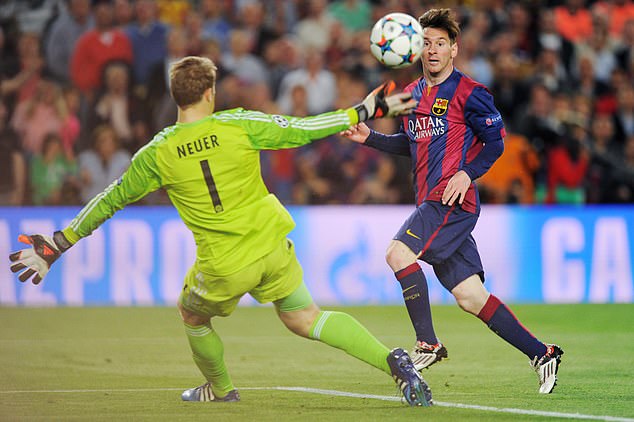 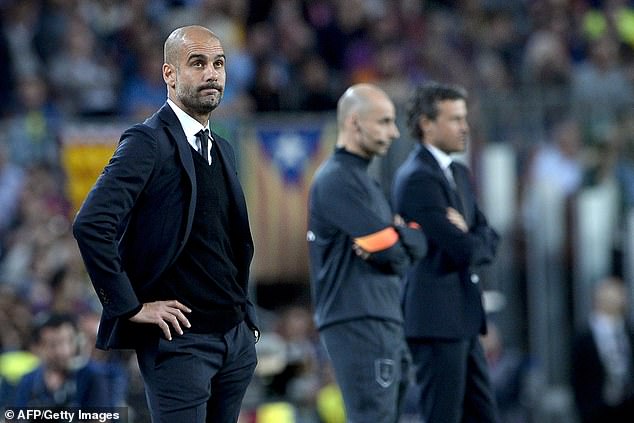 He asked his side to man-mark Barca all over the pitch and the Catalans had numerous chances to go ahead although the game was goalless after the 75th minute.

But Barca blew Bayern apart in an incredible finale, as Messi scored from outside the box then performed his famous dance around the hapless Jerome Boateng to score the sublime second goal.

Neymar then effectively ended the tie in added time, running through the pitch unopposed before nut-megging Manuel Neuer.

Sky Sports’ team of pundits that night could not believe what they were seeing.

‘To go three v three against the best strikeforce in world football… you don’t like calling Pep Guardiola stupid because he’s one of the best coaches but it was fascinating how he tried to stop Barca.’ said Jamie Carragher.

‘How brave was it? To go three v three at the back, we were saying ‘brave’ but it was madness to go up against that front three.’

‘I thought it was footballing suicide,’ added Jamie Redknapp.

Gary Neville, commentating the game live from the Nou Camp, said Neymar, Messi and Suarez ‘must feel like kids in a sweet shop’.

‘They play against packed defences week-in, week-out, very rarely do they ever get to play one v one,’ he added.

‘Pep Guardiola has gone and shocked us all.

‘Pep Guardiola is probably the only coach in world football who would do this away at the Nou Camp. I can’t think of any other coach who would employ these tactics.’

NO DE BRUYNE AGAINST SPURS

City’s quarter-final defeat by Tottenham on away goals in 2019 remains one of the most harrowing nights of the club’s recent history.

They felt wronged by Fernando Llorente’s goal, which they thought came off the player’s arm, and then saw Raheem Sterling’s last-gasp strike, which looked to have won the tie, cruelly ruled out by VAR for an earlier offside by Sergio Aguero.

But the dramatic ending to the tie, which ended 4-4, took the attention off another baffling Guardiola move in a crunch Champions League game, which saw him make the sensational move to drop Kevin de Bruyne for the first leg, and only turn to the Belgian in the 89th minute. 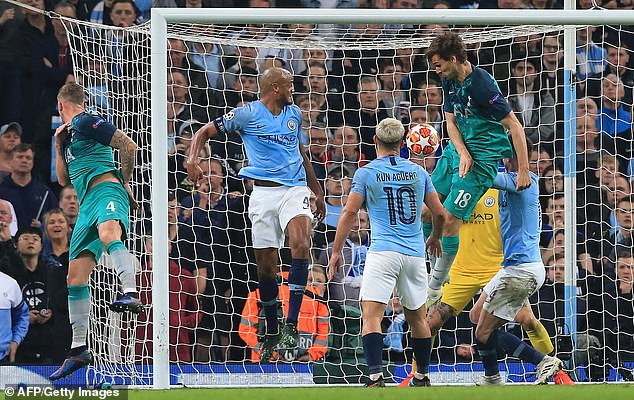 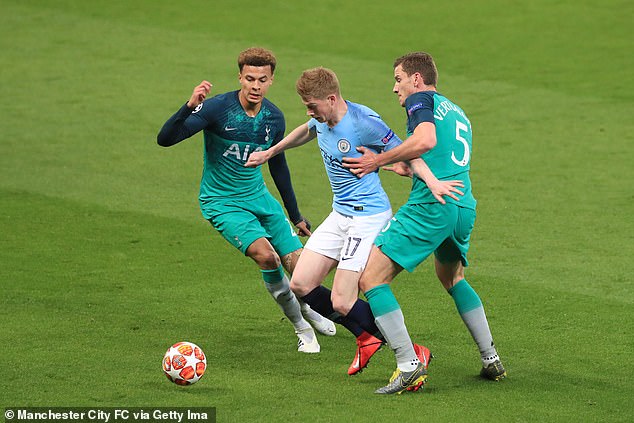 But Guardiola made a baffling call in leaving Kevin de Bruyne out of the first leg, a 1-0 defeat

Guardiola was so worried about Spurs’ attacking threat that he deployed two holding midfielders in Ilkay Gundogan and Fernandinho and although his side missed a golden chance to go ahead when Aguero missed a first-half penalty, they sure could have done with De Bruyne’s creativity as they looked to open up a tense, tight game at the newly opened Tottenham Hotspur stadium.

Spurs won the game 1-0 with an individual effort from Son Heung-min, after Fabian Delph appeared to have given up running as he thought the ball had gone out of play.

Guardiola justified the decision by saying he wanted more ‘balance’ in midfield and insisted his side had played well. He also complained that Spurs had more time to prepare for the game than City.

De Bruyne’s absence was not the only strange call from Guardiola that night, as he left out an in-form Leroy Sane for Riyad Mahrez, who had a poor showing.

City were handed a seemingly ideal draw when they were drawn against Lyon in last year’s one-off ‘Final Eight’ tournament in Lisbon, avoiding the likes of Bayern Munich, Barcelona, Paris Saint-Germain and Atletico Madrid.

But they suffered the biggest shock of the competition when they lost 3-1 to the unfancied French side, and Guardiola’s tactics yet again came in for heavy scrutiny.

This seemed the perfect occasion for Guardiola to keep it simple and stick with the 4-3-3 shape he had favoured for most of the season and with which his side had outplayed Real Madrid in both legs of their last-16 tie.

But Guardiola never does things the easy way and left plenty of jaws on the floor with a 3-4-2-1 formation against Lyon.

The biggest calls were leaving out Bernardo Silva, who had had an exceptional season, and starting Eric Garcia at centre-back. 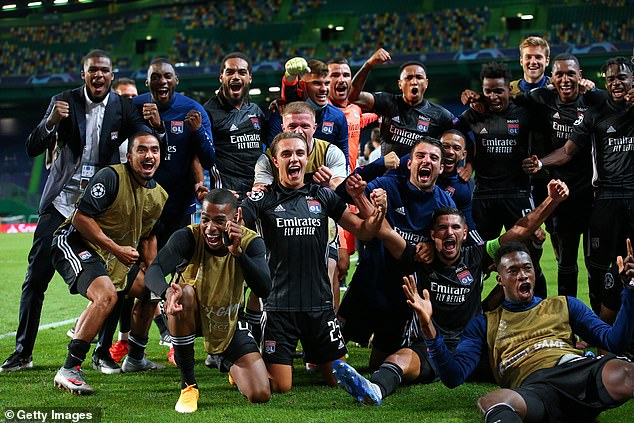 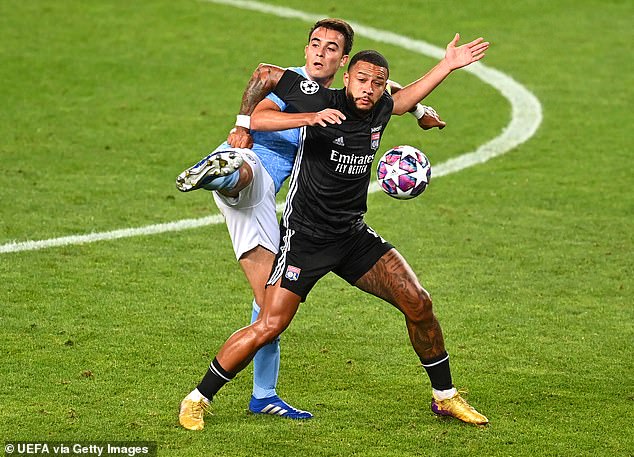 Garcia had played well in the final stretch of the Premier League season but the Spaniard, then aged 19, had hardly any Champions League experience and proved thoroughly unsuitable to such a big occasion, coming up short for two of Lyon’s three goals.

He was caught out of position then out-muscled by Karl Toko Ekambi, who laid the ball off for Maxwel Cornet to fire Lyon in front.

He then failed to cut out a through ball which led to Moussa Dembele putting Lyon 2-1 up.

City’s players were far from blameless, as Gabriel Jesus missed a good chance to give them the lead and Raheem Sterling squandered an equaliser when he somehow sent the ball over the bar with the goal gaping.

But the game was remembered as another moment when Guardiola made a problem for his side by trying to innovate.

The coach was panned for the move by an unlikely figure in City defender Oleksandr Zinchenko’s fiance Vlada Sedan, a sports reporter.

‘This is Guardiola’s puncture. At such a crucial moment, making such an experimental tactic for City is a bummer,’ she said.

NO DEFENSIVE MIDFIELDERS AGAINST CHELSEA

Given how Guardiola had played holding midfielders against the likes of Lyon and Spurs, his decision to go into battle against Chelsea with no defensive support in midfield turned many heads.

‘He changed the way he had played all season,’ Rio Ferdinand said on BT Sport.

‘He has always had Rodri or Fernandinho in there but he changed it. We know tactically he tinkers, he might have seen a weakness in there but Thomas Tuchel nullified any threat.

‘We saw Riyad Mahrez and Raheem Sterling played really wide, they’ve not really done that this season and maybe that is something City did wrong.’ 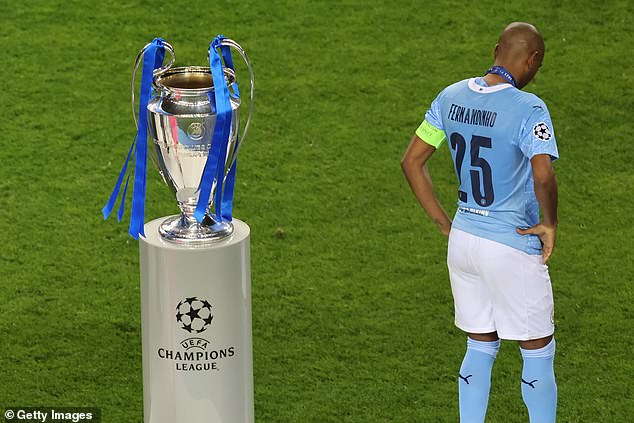 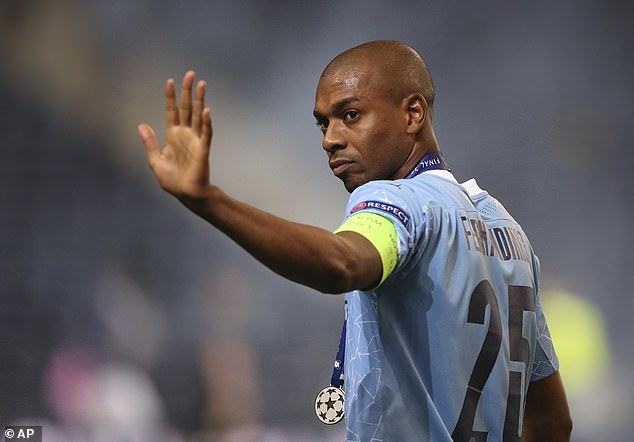 ‘You want him standing next to you in the trenches,’ said Sutton of Brazilian Fernandinho

While Tuchel could count on the tireless running of N’Golo Kante and the intelligence of Jorginho alongside him in a double midfield pivot, City’s most defensive minded player in the middle of the park was Ilkay Gundogan and he and Phil Foden and Bernardo Silva were powerless to stop Chelsea’s frequent counterattacks.

Guardiola said he went without Fernandinho and Rodri because he wanted to have ‘quality players’ to find space against Chelsea.

‘To have speed, to find the small players, the quality, the brilliant players, inside, in the middle and between the lines. This was the decision,’ he said.

‘You need your leaders and Fernandinho is that,’ Sutton said on BBC 5Live.

Roy Keane and Patrick Vieira were enforcers and he can drag their team up, you want him standing next to you in the trenches.’